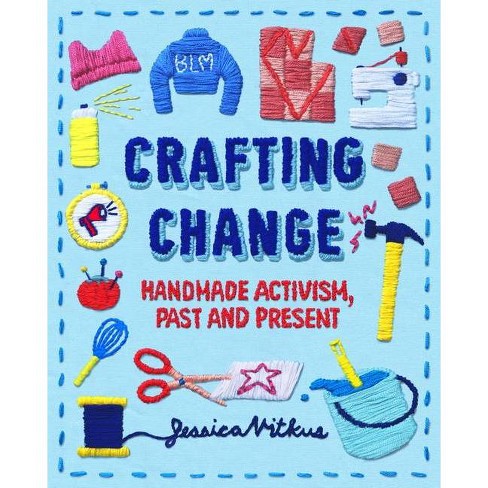 "An energetic, informative, and inspiring exploration of craftivism -- the intersection of art and activism -- throughout American history, with particular focus on the present day"--

An informative and inspiring exploration of craftivism -- the intersection of handicraft and activism -- designed to encourage young creators while providing meaningful historical context.

You don't have to be old enough to vote to drive political change. In Crafting Change, author, TV producer, and craftivist Jessica Vitkus explores the rich lineage of craftivism, with profiles of craftivisit icons, many of whom are women and people of color. This YA non-fiction book shines a light on artist-driven projects like This Is Not a Gun - workshops where people sculpt objects the police have mistaken for a gun in fatal shootings -- alongside creative movements that mobilized entire communities, like the AIDS Memorial Quilt and the Pussyhat project for the 2017 Women's March. This engaging narrative combines compelling artist interviews with full-color photos of creators and crafts alike. A perfect book for teens who want to channel their creativity into political action, with ideas for simple projects sure to appeal to budding craftivists.

Jessica Vitkus is a writer and television producer living in New York City. She has written craft stories and developed craft projects for Martha Stewart magazines and television, and has worked as a writer/producer for MTV News, Pop-Up Video, The Daily Show with Jon Stewart, and Late Night with Stephen Colbert.
If the item details above aren’t accurate or complete, we want to know about it. Report incorrect product info.