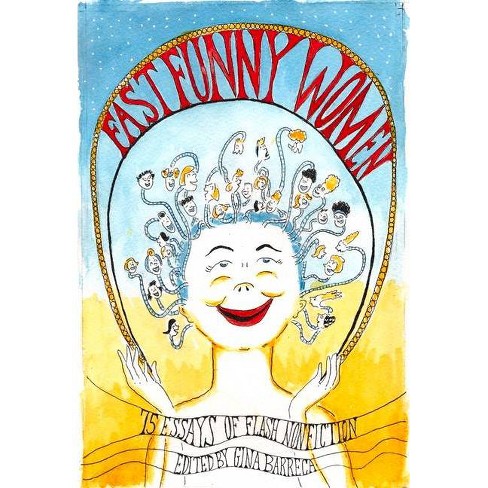 "Every man should read this book." --Jay Heinrichs, author of Thank You for Arguing

75 women writers, ages 20 to 89, were invited by editor Gina Barreca to make a party out of their life's most unnerving, challenging, illuminating, desperate, and hilarious moments. You know many of these brilliant women, but you've never heard them like this! With new works commissioned for the book from:

"Like funny women themselves, Fast Funny Women contains multitudes. Barreca -- feminist, humorist, teacher and writer -- has assembled an impressive group of funny ladies for this book. Their essays peek into classrooms, careers, care packages, and the unique and special hell of online dating. It's a sampler of humor and humanity that will appeal to everyone, no matter their experience." --A.J. O'Connell, author of A Perfect Facebook Life and Beware the Hawk

"With its punchline, the Hollander story is like a stand-up comedian's joke. Most of the Fast Funny Women essays, however, aren't so laugh-out-loud. Instead, they tend to be wry takes on the many aspects of life as a modern woman." --Third Coast Review

Hailed as "smart and funny" by People, Gina Barreca was deemed a "feminist humor maven" by Ms. She has written for most major publications, including The New York Times, The Chronicle of Higher Education, Cosmopolitan, and The Harvard Business Review. Board of Trustees Distinguished Professor at UCONN as well as winner of its highest award for excellence in teaching, Gina's written ten books including the bestselling They Used to Call Me Snow White...but I Drifted.
If the item details above aren’t accurate or complete, we want to know about it.

Funny How It Works Out - by Manon Mathews (Hardcover)