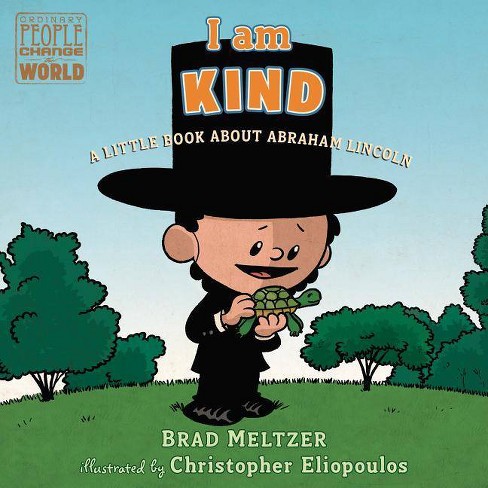 Meltzer's "New York Times"-bestselling biography series now features board book versions for the youngest of readers that focus on the traits that made our heroes great. This volume profiles the kindness demonstrated by the nation's 16th president. Full color.

The littlest readers can learn about Abraham Lincoln in this board book version of the New York Times bestselling Ordinary People Change the World biography. This friendly, fun biography series focuses on the traits that made our heroes great--the traits that kids can aspire to in order to live heroically themselves. In this new board book format, the very youngest readers can learn about one of America's icons in the series's signature lively, conversational style. The short text focuses on drawing inspiration from these iconic heroes, and includes an interactive element and factual tidbits that young kids will be able to connect with. This volume tells the story of Abraham Lincoln, America's sixteenth president.

Brad Meltzer is the New York Times bestselling author of Heroes for My Son, Heroes for My Daughter, The Lincoln Conspiracy, and a number of suspense novels like The Lightning Rod. He also helped find the missing 9/11 flag with his History Channel television show Brad Meltzer's Lost History. He lives in Florida with his wife and their three children. (And did you know that a picture of Brad is hidden in every book in this series?)

Christopher Eliopoulos began his illustration career at Marvel Comics, and has worked on thousands of comics, including his own Cow Boy and Franklin Richards: Son of a Genius. He is the author and illustrator of the picture books The Yawns Are Coming! and The Giggles Are Coming! and the graphic novels Cosmic Commandos and Monster Mayhem. He lives in New Jersey with his wife and their college-graduate twin sons (who also make an appearance in each Ordinary People Change the World book).
If the item details above aren’t accurate or complete, we want to know about it.

I Am Sacagawea - (Ordinary People Change the World) by Brad Meltzer