Never Give Up - by Michael Youssef (Paperback) 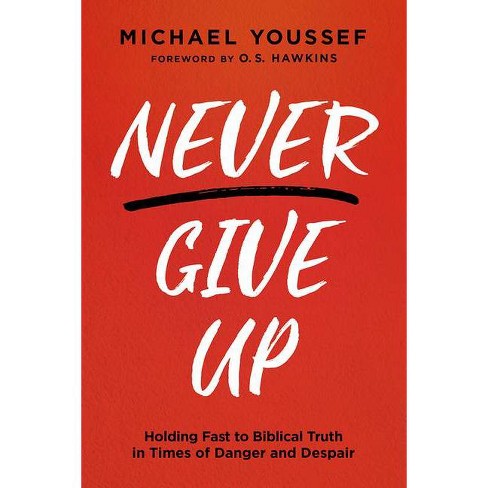 What if the answers to our modern crises are found in ancient truths? This book will give you the hope and courage you need to stay firm in your faith despite the circumstances going on around you. You will keep your devotion to God and boldly share your faith. The truth of the gospel is in great danger. Biblical beliefs are being attacked. Biblical morality is being assaulted. Christians are being insulted for holding to the ancient truths found in the Scriptures. We are in a fight to be heard and not canceled--to share our faith amidst the cancel culture. What is God's message to us this day? What does He want from us in these troubled times? Resilience. Courage. Faithfulness. His call to us is to never give up. In his last letter, the aged and imprisoned apostle Paul realized that his final days were approaching. So, he wrote his last legacy message for his beloved Timothy and for future generations of disciples--namely you and me. In Never Give Up, Dr. Michael Youssef echoes the words of the apostle Paul so that we may experience encouragement--and know triumph in the midst of defeat. With a sense of urgency, we are called to the steadfast service of a certain conviction. Despite hardship and suffering, we can learn to be unwavering in our devotion. As followers of Jesus, too often we are tempted to throw in the towel, give up the fight, and give in to fear. But we must not let that be our reality. We have not been abandoned. God is here. Yet conviction is needed and service is required. No matter what comes our way, we must never give up.

Dr. Michael Youssef was born in Egypt and lived in Lebanon and Australia before coming to the United States and fulfilling a childhood dream of becoming an American citizen. He holds degrees from Moore College in Sydney and Fuller Theological Seminary in Pasadena, California, and holds a doctorate in social anthropology from Emory University in Atlanta. He founded The Church of the Apostles, which was the launching pad for Leading the Way's international ministry. Dr. Youssef has authored more than forty books, including popular titles such as Saving Christianity and When the Crosses Are Gone. He and his wife, Elizabeth, reside in Atlanta.
If the item details above aren’t accurate or complete, we want to know about it. Report incorrect product info.