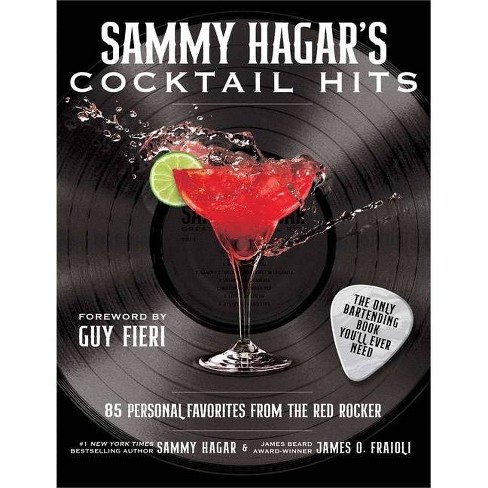 Toast to the good life with the Red Rocker's best cocktail recipes! Sammy Hagar may be best known as the former frontman of the iconic band Van Halen. His fans know him as the Red Rocker and as the songwriter behind hits like "I Can't Drive 55," "Right Now," and "Why Can't This Be Love." However, music is just one of his passions. Sammy is a businessman, a connoisseur of great cocktails, and the creator of Cabo Wabo Tequila, Sammy's Beach Bar Rums, and--along with his good friend and celebrity restaurateur Guy Fieri--a line of Santo Tequilas and Mezquila. He created Cabo Wabo Cantinas and Sammy's Beach Bar & Grills so people could hang out with their friends and families, have a few drinks, laugh, and enjoy the good times and unique cultures of the places he enjoys most--and the recipes in Sammy's Cocktail Hits: 85 Personal Favorites from the Red Rocker reflect those differences. In addition to bartending basics and cocktail foundations, chapters include:
Enjoy drinks such as the Coconut Mojito, Maui Mama, Tiki Swizzle, Blanco Gimlet, Coco Loco, Coronarita, Santo Oaxaca, Santa Paloma, Brazilian Kiss, Vojito, Strawberry Surf, and Black & Blue Lemonade, and more!

"I've spent many nights with Sambo in Cabo, Vegas, his house, my house. . . .The guy knows how to shake it up in more ways than one!" --TOBY KEITH "The Red Rocker has done it again. My friend sure knows his way around the bar! Delicious!" --CHEF EMERIL LAGASSE "Sammy's palate is mesmerizing. He can tell you what's in a cocktail or the varietals of a wine he's never tasted before. He has a natural gift that leaves you speechless!" --LUCA GARAVOGLIA, CHAIRMAN, CAMPARI GROUP "I've tasted Sammy's cocktails many times at my restaurant. It's difficult to keep him out from behind the bar!" --CHEF MICHAEL MINA "Over the years, Sammy has acquired and used extensive knowledge of spirits to create his fabulous brands and cocktails! Terrific job, Sammy!" --JOHN PAUL DE JORIA, FOUNDER, PATRÓN SPIRITS "I've been appreciating Sammy's spirits and cocktails for nearly two decades. His knowledge and passion shine in every glass!" --BOB CABRAL, JAMES BEARD AWARD-WINNING WINEMAKER

SAMMY HAGAR is one of rock music's most dynamic artists. He's earned the highest respect of the music industry with a Grammy Award and induction into the Rock and Roll Hall of Fame. Along his journey, he's become a dedicated philanthropist, a New York Times bestselling author, and auspicious entrepreneur. He's the owner of Cabo Wabo Cantinas, Sammy's Beach Bar and Grills, Sammy's Beach Bar Rum, and Santo Spirits, which he co-founded with celebrated chef Guy Fieri. Visit www.redrocker.com. JAMES O. FRAIOLI is a James Beard Award-winning cookbook author. He has more than 40 published titles to his credit. His celebrated books have been featured on the Food Network, The Ellen DeGeneres Show, and in O, The Oprah Magazine, Vogue, People, Forbes, the Wall StreetJournal, and the New York Times. He is the founder and president of Culinary Book Creations. Visit www.culinarybookcreations.com.
If the item details above aren’t accurate or complete, we want to know about it. Report incorrect product info.