Speaking for Myself - by Sarah Huckabee Sanders 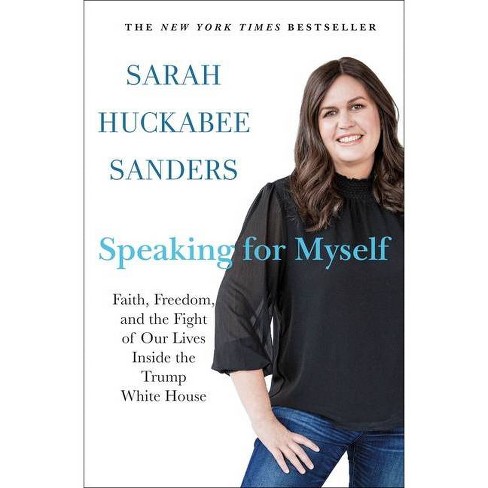 A candid, riveting account of the Trump White House, on the front lines and behind the scenes. Sarah Huckabee Sanders served as White House Press Secretary for President Donald J. Trump from 2017 to 2019. A trusted confidante of the President, Sanders advised him on everything from press and communications strategy to personnel and policy. She was at the President's side for two and a half years, battling with the media, working with lawmakers and CEOs, and accompanying the President on every international trip, including dozens of meetings with foreign leaders--all while unfailingly exhibiting grace under pressure. Upon her departure from the administration, President Trump described Sarah as "irreplaceable," a "warrior" and "very special person with extraordinary talents, who has done an incredible job." Now, in Speaking for Myself, Sarah Huckabee Sanders describes what it was like on the front lines and inside the White House, discussing her faith, the challenges of being a working mother at the highest level of American politics, her relationship with the press, and her unique role in the historic fight raging between the Trump administration and its critics for the future of our country. This frank, revealing, and engaging memoir will offer a truly unique perspective on the most important issues and events of the era, and unprecedented access to both public and behind-the-scenes conversations within the Trump White House.

SARAH HUCKABEE SANDERS served as the White House press secretary from 2017-2019; she was the third woman and first mother to ever hold the position. The daughter of former Arkansas Governor Mike Huckabee, Sanders has worked in leadership roles for U.S senators, governors, and presidential campaigns. Sarah has been recognized in TIME Magazine's "40 under 40" as one of the best political operatives of her generation. She is a Fox News contributor, advises major companies, and serves on the Fulbright board as an appointee of President Trump. Sarah lives in Little Rock, Arkansas with her husband Bryan, their children Scarlett, Huck, and George, and their golden retriever Traveler.
If the item details above aren’t accurate or complete, we want to know about it. Report incorrect product info.