The Making of Her - by Bernadette Jiwa (Hardcover) 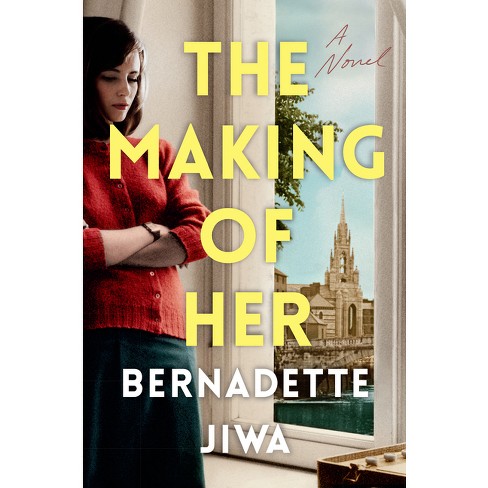 "'People were forever telling her how lucky she was. But what did people know?' Dublin 1965. When Joan Quinn, a factory girl from the Cranmore Estate, marries Martin Egan, it looks like her dreams have come true. But all is not as it seems. Joan lives in the shadow of a secret - the couple's decision to give up their first daughter for adoption only months before. For the next three decades, Joan's marriage and her relationship with her second child Carmel suffer as a consequence. Then one day in 1996, a letter arrives from their adopted daughter. Emma needs her birth parents' help; it's a matter of life and death. And the fragile facade of Joan's life finally begins to crack."--Provided by publisher.

An unforgettable debut novel about family secrets, falling apart, and coming together.

Dublin 1996. Joan Egan lives an enviable life. She and her husband, Martin, and daughter, Carmel, are thriving in Dublin at the dawn of an economic boom. But everything changes when Joan receives a letter from Emma, the daughter who she and Martin gave up for adoption thirty years before, asking for a life-or-death favor. While Joan grapples with the guilt over giving up her baby long ago, she must confront her present as the cracks in her marriage become impossible to ignore and simmering tension with Carmel boils over. Meanwhile, Carmel and Emma must come to terms with the perceived sins of their mother, to imagine a future for their family before it is too late. Spanning the nineties and the sixties, with Dublin as its backdrop, The Making of Her is the tender and page-turning story of marriage, motherhood, a culture that would not allow a woman to find true happiness--and her journey to finally claim it.

"Bernadette Jiwa's powerful debut serves as a tribute to motherhood and the strength of women."
--Veranda Memorable insights are quotable and the ending is satisfyingly true to the ups and downs experienced by Joan's extended family. Fans of Maeve Binchey, Cathy Kelly, or Adriana Trigiani may find a new favorite author here."
--Booklist (starred) Tightly crafted women's fiction, with a sensitive look at love, conscience, and loyalty.
--New York Journal of Books

"While the issue of accidental pregnancy might have seemed an old-fashioned problem just a year ago, it's suddenly deeply relevant again. Jiwa reminds us that no such decision can be made lightly, and whatever happens will follow the parents--but mostly the mother--for the rest of their life."
--The Star Tribune "The Making of Her sucked me in from the very first page, and didn't let up until I'd turned the last. Heartwarming and heartbreaking, it is an exquisite examination of the secrets that haunt us. I cried several times. A stunning debut."
--Sally Hepworth, New York Times bestselling author of The Good Sister "The Making of Her is a compelling and tender exploration of the unattainable expectations of women, the shame and guilt inherent in motherhood, and the reverberations of the hardest choices we make. Jiwa gives us a beautifully crafted, thought-provoking novel that ultimately celebrates the strength of women. A true pleasure to read."
--Ashley Audrain, New York Times bestselling author of The Push "Bernadette Jiwa's moving fiction debut, The Making of Her, explores the impact of secrets, the magnitude of our choices, and the tenuous binds of family. Set in Dublin and shifting between past and present, this deeply evocative novel is a masterful study into what it really means to love, and to forgive. The Making of Her is ultimately a story about the plight and power of women, and is not to be missed."
--Karma Brown, bestselling author of Recipe for a Perfect Wife "An absorbing, brilliantly paced book; I didn't want it to end."
--Roddy Doyle "Oh how I love this novel! Once I started reading I never looked away, except when my eyes filled with tears. The Making of Her renders its characters so perfectly, and with so much compassion, they feel like dear friends after only a few chapters. Bernadette Jiwa has written a beautiful tribute to what our lives can become when shame is forgotten, and love is reclaimed."
--Nina de Gramont, author of The Christie Affair Bernadette Jiwa writes with compassion and grace about what it means to be a mother, a daughter, and a sister.
--Pip Williams, author of The Dictionary of Lost Words

Bernadette Jiwa was born into a house with no books and a home full of stories, in Dublin, Ireland. She migrated to the UK in the 1980s, raised three sons with her husband, and now lives in Melbourne, Australia. She is the creator and leader of The Story Skills Workshop--a program that has taught thousands of people to harness the power of their everyday stories.
If the item details above aren’t accurate or complete, we want to know about it.

The Silence in the Sound - by Dianne C Braley

Bend Toward the Sun - by Jen Devon (Paperback)

Making Money in the Middle Ages - by Rory Naismith (Hardcover)