The Many Colors of Harpreet Singh - by Supriya Kelkar (Hardcover) 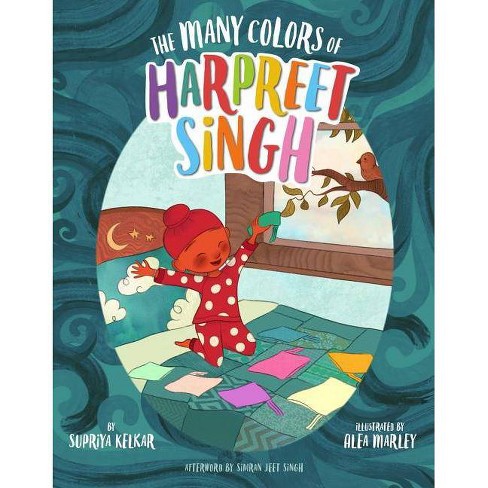 Harpreet Singh has a different color for every mood and occasion, from happy sunny yellow to courageous red. He especially takes care with his patka--his turban--making sure it always matches his outfit. But when Harpreet's mom finds a new job in a snowy city and they have to move, everything just feels gray. Can he find a way to make life bright again?

Harpreet Singh has a different color for every mood and occasion, from happy sunny yellow to courageous red. He especially takes care with his patka--his turban--making sure it always matches his outfit. But when Harpreet's mom finds a new job in a snowy city and they have to move, everything just feels gray. Can he find a way to make life bright again?

"Indian-American Harpreet Singh is a practicing Sikh and has a different color patka, or head covering, for every occasion. He wears yellow when he feels sunny and cheerful, pink when he feels like celebrating, and red when he wants to feel brave. When his mother gets a job in a small snowy town across the country, Harpreet is apprehensive about the move despite his parents' assurance that it will be an adventure. Harpreet begins to wear colors for not-so-happy occasions: He wears blue to the airport because he's nervous and gray when he's sad. Most often of all, however, Harpreet wears white, as he feels shy and doesn't want to be seen. Will Harpreet ever feel like his cheerful self in his new home? Kelkar's telling of Harpreet's story is crisp and straightforward, and Marley's bright illustrations tactfully and subtly convey cultural differences that make Harpreet feel different from and invisible to his peers. In the lunchroom scene with all the other children, for example, Harpreet has in front of him a large plate of traditional Indian chapati (bread) and dal (lentils), whereas his peers are shown munching on more "American" dishes (like cake). An afterword by Simran Jeet Singh, a scholar and professor of Sikhism, helps contextualize this story for readers who are not familiar with the religion. This simple yet sensitive story about a child coming to terms with things beyond his control will resonate across cultures." --Kirkus "The digital illustrations depict Harpreet as joyful and exuberant, which makes his shift to sadness and isolation after the move palpable. Subtle details in the illustrations, such as kids staring at Harpreet's 'different' lunch, position him not only as the new kid, but underscore his feelings of isolation as a cultural outsider. Harpreet's symbolic color system is used masterfully to add depth to the illustrations, as on the page where Harpreet sits, small and alone wearing shy white, on a background of joyful celebratory pink as a cascade of Valentines--most with his name misspelled--floats away. VERDICT A lovely story about change and belonging that provides much-needed representation. A first purchase for all libraries."--School Library Journal (Starred review) "Supriya Kelkar's debut picture book, The Many Colors of Harpreet Singh, affirms through a Sikh boy and his colorful patkas ('a common style [of turban] for young boys') that there is beauty and boldness in self-love and friendship.
Illustrator Alea Marley immediately captures the attention of readers with title page art, extending across two pages, depicting the leaping figure of Harpreet, a swirling rainbow of all the colors he loves whooshing behind him. The first page of the book opens on a joyous Harpreet foregrounded against a muted pastel print, reveling in his love of colors. Through the pages, we see the different ways Harpreet uses patkas to express his emotions: yellow when he feels 'sunny, ' red for courage, gray when he's sad. Recently, he has been wearing white for feeling shy, which, now that he and his parents have moved across the country, is often the case at his new school.
Brilliant, brief text provides easy forward movement and fun moments for a read aloud, like the alliterative 'He wore pink... bopping along to bhangra beats.' Marley's digital illustrations include full-page spreads and smaller isolated scenes showcasing a gorgeous palette of colors and subtle indicators of the challenges faced by Harpreet in his new community. One page shows the various incorrect ways classmates spell his name on valentines; another shows everyone curiously examining his lunch. An enlightening afterword from professor of Sikhism Simran Jeet Singh shares important context about the Sikh religion and the role of turbans as social equalizers.
Discover: This bright, vivacious picture book captures a spectrum of emotions as a young boy shows off his colorful head coverings." --Shelf Awareness "Alea Marley's cover illustration screams JOY and LOVE. I love everything about this important and necessary picture book, especially Harpreet Singh and his big heart." --Mr. Schu, Ambassador of School Libraries for Scholastic "I was so happy to see a book celebrating Sikh culture and religion on the cover. This children's book showcases a beautifully colored illustration of a young Sikh boy wearing the traditional turban, or patka. Sikh people have unfairly suffered from our current racist society, so I'm happy to see a book celebrating their kindness and charisma. This book is relatable to anyone who has had to move and make new friends. Supriya Kalkar expresses her protagonist's joys and fears through colors of the season and his environment. I would love to see more books like this, celebrating the many cultures of people of color." --Bookriot

Born and raised in the Midwest, Supriya Kelkar learned Hindi as a child by watching three Hindi movies a week. Supriya is a screenwriter who has worked on the writing teams for several Hindi films and one Hollywood feature. Her books include American as Paneer Pie, Strong as Fire, Fierce as Flame, and Ahimsa. Learn more at supriyakelkar.com. Alea Marley is a children's illustrator who is is currently based in North England. Her illustration clients include Houghton Mifflin Harcourt, Sterling, American Girl, Little Bee, and Macmillan. Find her online at aleamarley.co.uk.
If the item details above aren’t accurate or complete, we want to know about it.

The Montessori Method: My First Book of Feelings - (Board Book)

The Snowy Day by Ezra Jack Keats (Board Book)

When Someone Is Afraid (Punjabi/English) - by Valeri Gorbachev (Paperback)

Pigeon Has to Go to School! - (Pigeon) by Mo Willems (Hardcover)

Pete the Cat: I Love My White Shoes (Hardcover) by Eric Litwin

My Name - by Supriya Kelkar (Hardcover)

That Thing about Bollywood - by Supriya Kelkar

So Many Angels - by Diane Stelfox Cook (Paperback)