Uncomfortable Conversations with a Black Boy - by Emmanuel Acho 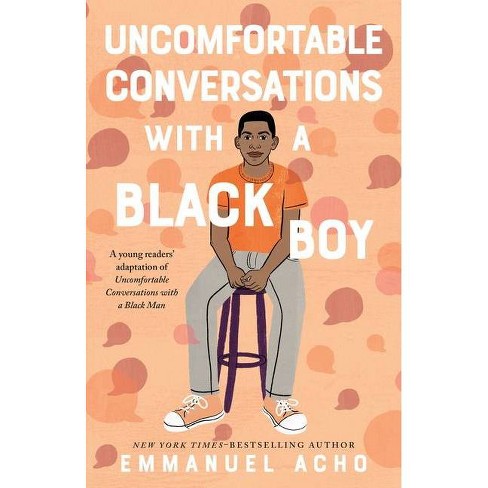 A young reader's edition of Emmanuel Acho's Uncomfortable Conversations with a Black Man, aimed at opening a dialogue and mending the racial divide in America amongst our youngest generation.

Young people have the power to affect sweeping change, and the key to mending the racial divide in America lies in giving them the tools to ask honest questions and take in the difficult answers. Approaching every awkward, taboo, and uncomfortable question with openness and patience, Emmanuel Acho connects his own experience with race and racism--from attending majority-white prep schools to his time in the NFL playing on majority-black football teams--to insightful lessons in black history and black culture.
Uncomfortable Conversations with a Black Boy is just one way young readers can begin to short circuit racism within their own lives and communities.

*There is humor, lightness, and relatability in Acho's reliance on pop culture and experience that will make this title a standout for use in classrooms, libraries, and homes. [W]hether you are 18 or 80, there's something to learn from in this thought-provoking pick. --Booklist, starred review

Emmanuel Acho is a Fox Sports Analyst (Co-Host, FS1 "Speak for Yourself") and Host/Producer of "Uncomfortable Conversations with a Black Man", a web series about racism to drive open and uncomfortable dialogue. After earning his undergraduate degree in sports management in 2012, Emmanuel was drafted by the Cleveland Browns. He was then traded to the Philadelphia Eagles in 2013, where he spent most of his career. While in the NFL, Emmanuel spent off-seasons at the University of Texas to earn his master's degree in Sports Psychology. In 2016, Emmanuel left the football field and picked up the microphone to begin his broadcast career. In 2018, Emmanuel was promoted within ESPN, where he served as the youngest national football analyst and was named a 2018 Forbes 30 Under 30 Selection. In 2017, he and his family's non-profit organization, Living Hope Christian Ministries, raised enough funds to build a hospital in rural Nigeria.
If the item details above aren’t accurate or complete, we want to know about it. Report incorrect product info.