Loki: A Bad God's Guide to Being Good - by Louie Stowell (Hardcover) 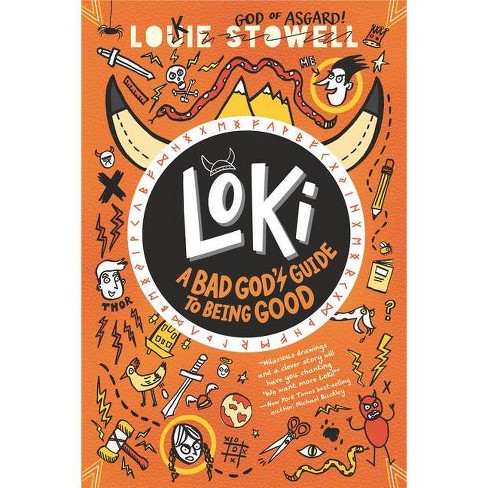 Packed with doodles and cartoons, here is the diary of Loki as he's trapped on earth as a petulant eleven-year-old--and even worse, annoying thunder god Thor is there, too. After one prank too many, trickster god Loki has been banished to live as a kid on Earth. If he can show moral improvement within one month, he can return to Asgard. If he can't? Eternity in a pit of angry snakes. Rude! To keep track of Loki's progress, King Odin (a bossy poo-poo head) gives him this magical diary in which Loki is forced to confess the truth, even when that truth is as ugly as a naked mole rat. To make matters worse, Loki has to put up with an eleven-year-old Thor tagging along and making him look bad. Loki is not even allowed to use his awesome godly powers! As Loki suffers the misery of school lunch, discovers the magic of internet videos, and keeps watch for frost giant spies, will he finally learn to tell good from bad, trust from tricks, and friends from enemies? Louie Stowell's witty text and hysterical drawings will keep readers in stitches from start to finish.

Salutary reading for anyone who needs steering toward good behavior...or good-ish anyway. --Kirkus Reviews Hilarious drawings and a clever story will have you cheering for the bad guy and chanting: We want more Loki!
--Michael Buckley, New York Times best-selling author of the NERDS and Finniverse series

Louie Stowell started her career writing carefully researched books about space, ancient Egypt, politics, and science, but eventually lapsed into just making stuff up. The author of the Kit the Wizard series, she was inspired by her research into Norse myths to write Loki: A Bad God's Guide to Being Good, her first project as both author and illustrator. Louie Stowell writes full-time in London, where she lives with her wife, Karen; her dog, Buffy; and a creepy puppet that is probably cursed.
If the item details above aren’t accurate or complete, we want to know about it. Report incorrect product info.