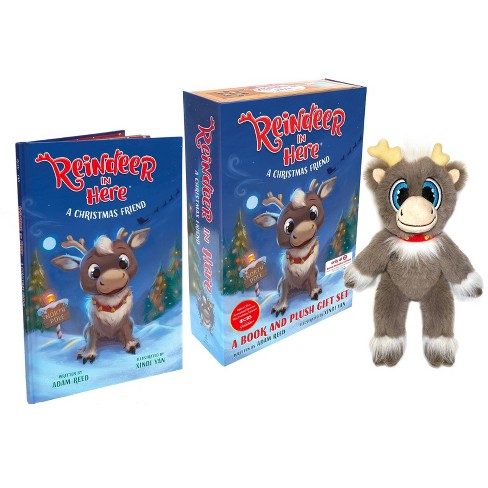 Start a new holiday tradition with this giftable boxed set that comes with a timeless picture book and a lovable, huggable plush Reindeer. This exclusive Target edition includes coloring sheets, stickers and a photo ornament! Reindeer in Here, a one-hour animated holiday special, will premiere November 29th on CBS and will also be available to stream live and on-demand on Paramount+.


This holiday legend from long, long ago
is a very special story that children should know.
A kind and true reindeer with one antler small
miraculously changed Christmas once and for all.

At holiday time, a special little reindeer with mismatched antlers shows up as an early gift from Santa to stay with each child and go on daily adventures with them. The reindeer learns the child's true Christmas wishes (and makes sure Santa does as well), all the while encouraging the child to celebrate their own differences. It's a new holiday tradition the whole family will love!


About the Author & Illustrator

Although never intending to be an author, Adam Reed has always been a storyteller. When not being a dad, he is CEO of Los Angeles-based, Emmy-nominated production company, Thinkfactory Media, one of the most prolific scripted and unscripted production companies in the business. He has created and produced over 1,000 hours of television. He was the youngest producer ever to be listed in the Hollywood Reporter's exclusive Reality TV Power List. Adam also continues to direct TV commercials and collaborate with some of the leading advertising agencies in the world. Adam lives in Brentwood, Tennessee, with his wife and two children--who all his books are dedicated to.

Xindi Yan left behind a small city in China to realize her dream of being a published artist. Having always wanted to illustrate children's books, she buried herself in countless books and drawings, collecting them even today. Xindi currently lives in Brooklyn with her husband and dreams about having a puppy in the near future.
If the item details above aren’t accurate or complete, we want to know about it.

How to Catch an Elf (Hardcover) by Adam Wallace, Andy Elkerton

5 out of 5 stars
Would recommend
TGriffin - 11 days ago, Verified purchaser
Great for the younger kids. Grandkids already have their reindeer & carry it everywhere.
Did you find this review helpful?

5 out of 5 stars
Excited Grandma - 12 days ago, Verified purchaser
As a grandma I gave this adorable tradition to my grandkids. They not only loved the story but now take their soft cuddly reindeer everywhere with them. And their parents are happy there’s no stress to move it like an elf every day!
1 guest found this review helpful. Did you?

5 out of 5 stars
Would recommend
Jaz - 14 days ago
The cutest tradition & sooo much easier than elf on the shelf. Our daughter loves cuddling her reindeer and was excited to name her Lelia 🤍😍
Did you find this review helpful?

5 out of 5 stars
Would recommend
LAPawlicki - 17 days ago, Verified purchaser
Reindeer In Here is basically a much more "active" Elf On The Shelf, filling the elf's niche of reporting to Santa each night while allowing itself to touched, played with, and taken along for adventures, unlike the elf. The RIH also has the added bonus of teaching kids that "Different is Normal" through its asymmetrical antlers. It's a much cuter and less stressful alternative to EOTS, but as someone who also owns an Elf and all three Elf Pets, I'm not against using them both if the family is up to the task. I discovered Reindeer In Here just last year, when I bought the original 2017 version of the kit. I found it quite charming, but I was never a fan of the book's illustrations, which felt "unfinished." Imagine my surprise when I found out they were going to release a brand new, 2.0 version for 2022! This new version includes a much sturdier box (complete with air holes!), a smaller and more flexible plush (which may be my only minor complaint, as it makes the reindeer look like it walks on two legs), and a more compact book that has been given a complete overhaul illustration-wise. Major props to Xindi Yan (illustrator of the new book) because, when compared to the 1.0 version, the new art looks absolutely stunning. I'm ecstatic that RIH is getting a TV special, too! At the time of writing it has not yet aired (Nov 29 at 9pm on CBS), but I'm super excited to see how expands on the universe of this charming new Christmas tradition!
5 guests found this review helpful. Did you?

5 out of 5 stars
Would recommend
cs - 22 days ago
Beautifully made! The reindeer is so cuddly. The team who made this did a wonderful job! Can't wait to share with my own kids and nieces and nephews this year!!!
1 guest found this review helpful. Did you?

Love the new Reindeer In Here!!!

5 out of 5 stars
Would recommend
gingyPNW - 23 days ago, Verified purchaser
I heard Reindeer In Here was making a new version and I just received my copy. My niece is going to love this! It will make a great early Christmas gift - I plan to give it to her at Thanksgiving. The box is really cute and will make a wonderful keepsake. It even has tiny air holes for the reindeer as it makes its way home! So cute!!!
2 guests found this review helpful. Did you?

Christmas magic in a box

5 out of 5 stars
Would recommend
Rremkus - 26 days ago, Verified purchaser
My daughter just loved opening up the crate to find so many fun surprises! Her very own reindeer, an envelope filled with activities and of course the magical Christmas story!
4 guests found this review helpful. Did you?

5 out of 5 stars
Would recommend
C Clopton - 26 days ago, Verified purchaser
We love reindeer in here! It is a sweet story, and my kids like having their own reindeer to share the holidays with!
1 guest found this review helpful. Did you?

5 out of 5 stars
Would recommend
Margaret - 26 days ago, Verified purchaser
The sweetest story. Our family’s Christmas Tradition!
1 guest found this review helpful. Did you?