The Beauty of Everyday Things - by Soetsu Yanagi (Paperback) 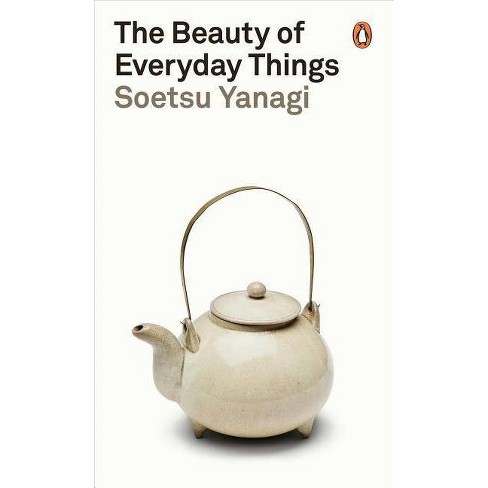 Long revered as the authority on craftsmanship and Japanese aesthetics, Yanagi devoted his life and writing to defend the value of craft. In an age of feeble and ugly machine-made things, The Beauty of Everyday Things is a call to deepen relationships with the objects that surround people.

The Japanese philosopher and aesthete's definitive, hugely influential exposition of his philosophy of folkcrafts, setting out the hallmarks of Japanese design as we know it today: anonymity, quality, simplicity and honesty--and, of course, wabi-sabi, the beauty of imperfection A Penguin Classic Our lives are filled with objects. Everyday things used in everyday settings, they are our constant companions. As such, writes Soetsu Yanagi, they should be made with care and built to last, treated with respect and even affection. They should be natural and simple, sturdy and safe--an aesthetic fulfillment of our practical needs. They should, in short, be things of beauty. Long revered as the authority on craftsmanship and Japanese aesthetics, Yanagi devoted his life and writing to defend the value of craft. In an age of feeble and ugly machine-made things, The Beauty of Everyday Things is a call for each of us to deepen our relationship with the objects that surround us. Inspired by the work of the simple artisans Yanagi encountered on his lifelong travels through Japan and Korea, this now-classic book is a heartfelt defence of modest, honest, handcrafted objects, from traditional teacups to jars to paper--objects that exemplify the beauty of everyday things.

"Yanagi's work is characterized by pure, organic form, an economy of means and material, and an emphasis on beauty in even the most functional and quotidian objects. Over time the designer's work has become, well, timeless." --T: The New York Times Style Magazine "Radical and inspiring . . . Yanagi's vision puts the connection between heart and hand before the transient and commercial." --Edmund de Waal, OBE, author of The Hare with Amber Eyes "Soetsu Yanagi's unerring eye has influenced generations of makers. His notion of Zen and the art of design continues to inspire all those involved in shaping our everyday world." --Jasper Morrison, British designer "It would not be entirely amiss to describe Yanagi's position in Japan as comparable to that of Ruskin and Morris in England. . . . He left as a legacy an aesthetic and religious creed of vital importance to men and women all over the world." --Bernard Leach, British potter "What impresses me most in Yanagi is the strength of his vision, his direct eye for beauty. His was an immediate and intuitive faculty of an extraordinary kind." --Shoji Hamada, Japanese potter

Soetsu Yanagi (1889-1961) was a philosopher, art historian, aesthete and poet. He evolved a theory of why certain objects made by unknown craftsmen were so beautiful, and became the founding father of the Japanese folk crafts ("mingei") movement. He helped establish, and was the first director of, the Japanese Folk Crafts Museum.
If the item details above aren’t accurate or complete, we want to know about it.