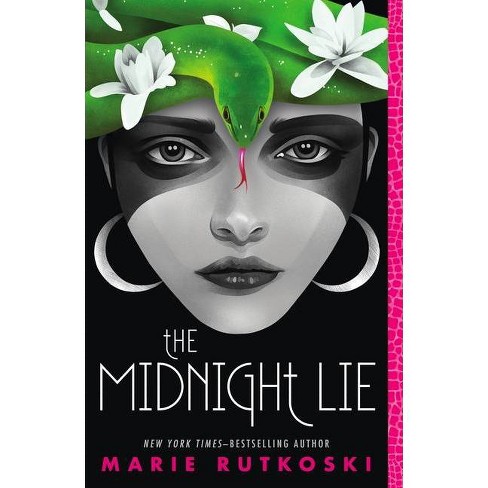 Set in the world of the New York Times-bestselling Winner's Trilogy, Marie Rutkoski's The Midnight Lie is an epic LGBTQ romantic fantasy about learning to free ourselves from the lies others tell us--and the lies we tell ourselves.

Where Nirrim lives, crime abounds, a harsh tribunal rules, and society's pleasures are reserved for the High Kith. Life in the Ward is grim and punishing. People of her low status are forbidden from sampling sweets or wearing colors. You either follow the rules, or pay a tithe and suffer the consequences. Nirrim keeps her head down, and a dangerous secret close to her chest. But then she encounters Sid, a rakish traveler from far away, who whispers rumors that the High Kith possess magic. Sid tempts Nirrim to seek that magic for herself. But to do that, Nirrim must surrender her old life. She must place her trust in this sly stranger who asks, above all, not to be trusted.

"Utterly immersive and gorgeous. Marie's stories are the loveliest knives that cut you straight to the quick." --Roshani Chokshi, New York Times-bestselling author of The Gilded Wolves

"Lush, romantic, and powerful. In The Midnight Lie, Marie Rutkoski spins a sensuous tale about awakening to the truth." --Malinda Lo, author of Ash

There is no doubt this is going to be one of the most complex and compulsively readable fantasies of the year. --Buzzfeed Prepare to be devastated by this gorgeously rendered sapphic fantasy. --Buzzfeed News "The Midnight Lie is unsettling and thrilling, the world intricate and purposeful, and Nirrim a protagonist readers will surely find enthralling." --Shelf Awareness

Read it for the romance, for the adventure, for the underlying commentary on divided societies--nothing disappoints. This is a treat for LGBTQ+ readers and the ending, happily, seems to indicate more to come. --Booklist "Rutkoski returns to the world of the Winner's Trilogy with elaborate descriptions and lush worldbuilding . . . Rutkoski offers a captivating LGBTQ love story, atmospheric in the vein of Bardugo's Six of Crows. Charismatic characters and compelling chapter cliffhangers build intrigue throughout." -- Publishers Weekly Stunning. --Bustle Ushers readers into [its] world. --PopSugar Excellent. --Mugglenet The Winner's Trilogy: The romance is heart-stoppingly lovely and admittedly steamy . . . but the raising of stakes and the reluctance of the couple to give up their respective causes, even as they confess their love for each other, lends their relationship a complexity not often seen in the genre. --The Bulletin, starred review "Like any epic page-turner worth its salt, Rutkoski's richly imagined world is full of dynamic repartee, gruesome battle scenes, and shifting alliances. A high-stakes cliffhanger will leave readers eagerly awaiting the next book." --Publishers Weekly, starred review "Rich characterization, exquisite worldbuilding and rock-solid storytelling make this a fantasy of unusual intelligence and depth...Precise details and elegant prose make this world fresh and vivid. The intricate and suspenseful plot, filled with politics, intrigue and even graphic violence, features neither heroes nor villains; every character displays a complex mixture of talents, flaws and motives...Breathtaking, tragic and true." --Kirkus Reviews, starred review

Marie Rutkoski is the author of The Shadow Society, the Kronos Chronicles, and the New York Times-bestselling Winner's Trilogy, which has garnered starred reviews from Kirkus, Publishers Weekly, and the Bulletin of the Center for Children's Books, and was included in lists for Best Books of the Year by Amazon, YALSA, and Kirkus, among others. She is a professor at Brooklyn College and lives in New York City.
If the item details above aren’t accurate or complete, we want to know about it.

The Cruel Prince - (Folk of the Air) by Holly Black (Paperback)

Sorcery of Thorns - by Margaret Rogerson

We Are Okay - by Nina Lacour

We Set the Dark on Fire - by Tehlor Kay Mejia

The Cabinet of Wonders - (Kronos Chronicles) by Marie Rutkoski (Paperback)