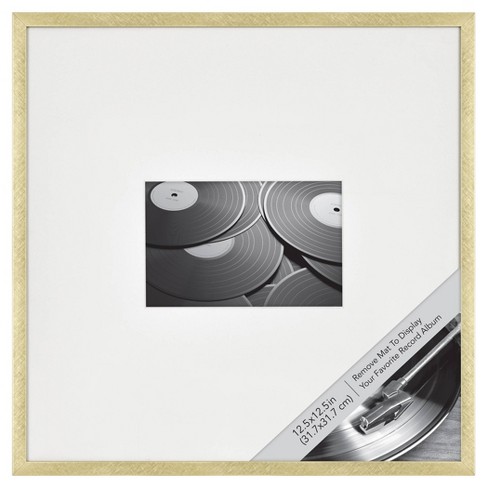 Add a bit of glam and grace to your entryway or gallery wall with this Brass Single Image Oversize Wall Frame from Project 62™. This rectangular picture frame is surrounded by a clean-lined border to create a modern display in your home or office space. Showcasing a subtle gold metal finish, it coordinates well with a wide variety of home decor. The sawtooth back allows for quick and easy wall mounting, while the glass front helps protect your photo from day-to-day dust, dampness and damage. Just display it on any wall in portrait or landscape orientation to make your picture elegantly stand out. You also have the option to utilize this frame to display your favorite record album by simply removing the white mat board this frame will fit a standard 12.5" x 12.5" record album cover.

1962 was a big year. Modernist design hit its peak and moved into homes across the country. And in Minnesota, Target was born — with the revolutionary idea to celebrate design for all. Project 62 embodies this legacy with a collection of modern pieces made for everyday living.
If the item details above aren’t accurate or complete, we want to know about it.

This item can be returned to any Target store or Target.com.
This item must be returned within 365 days of the date it was purchased in store, shipped, delivered by a Shipt shopper, or made ready for pickup.
See the return policy for complete information.

Q: Can the glass be removed?

submitted by Finn - 2 years ago

Q: Can this frame stand on a tabletop as well (like a typical picture frame) or is wall mount the only option?

submitted by RocknRoll - 2 years ago

Q: Does it have to be a record? Can I use this to frame 4x6 photos?

submitted by Bmelissa - 3 years ago

submitted by megcj - 3 years ago
See all questions (4)

5 out of 5 stars
Would recommend
Elizabeth B - 5 months ago, Verified purchaser
My husband and I are really into music. We have a music room with our guitars and recently had a personal vinyl created with our songs. Used this frame to display our vinyl. In love!
5.0
design
out of 5
design: 5 out of 5
5.0
quality
out of 5
quality: 5 out of 5
5.0
value
out of 5
value: 5 out of 5
Did you find this review helpful?

5 out of 5 stars
Would recommend
Royaltygirl - 5 months ago, Verified purchaser
I love the simplicity of this frame and how easily it opens up to put in your artwork.
Did you find this review helpful?

PRAYING THEY’RE NOT BEING DISCONTINUED!!!

5 out of 5 stars
Would recommend
KKPshops - 8 months ago, Verified purchaser
I ordered 1 of these frame 6 months ago hoping it would be good for some album covers. I'd gotten other brands specifically made to frame albums and was disappointed in the look or only hold the cover or the actual album! THIS ONE IS BY FAR THE BEST AND I'VE SINCE BOUGHT 20-30 MORE!!! Surprisingly the frame doesn't look cheap at all, the very subtle line etching of the metal design is wonderful because a few of them got knocked around (by me...sigh) but none even showed a single scratch or even that they've been touched! While I don't know how they work as true picture frames, they are perfect for albums! The back clips have a "spring action" type hold so I've been able to choose to frame the cover only or have it hold both the record in its cover! I even got a double LP in without a problem! I worked at a gallery years ago and am VERY picky about frames! I like to keep a cohesive look with frames so when the subject or photo styles are different, they still work together. I pay a lot for archival quality mats, glass with UV protection, wood frames with tongue and groove corners. I've actually put these up alongside some wooden ones in 1 color and they look great together! They look they heavy but they're surprisingly lightweight which is wonderful hanging an album! When I came to order a few more I saw the Target store nearest to me has only a few in stock. The super centers are all listed as out of stock and other locations have "not sold at this location"!?!? I will be crushed if these are no longer available since I have about 30 more albums I wanted framed to finish 2 large walls of our downstairs game room!!! But, Target got a lot more of my money than just frames. After I found how much I liked the frames I started buying re-released albums of ones I already have. Some of mine are collector's items because I just had a "feeling" when I bought the original pressing and kept the shrink wrap on. Like when Pearl Jam released Vs. on vinyl a week before the CD was available. So, I've bought many re-released albums of ones already own but wouldn't frame as they're in amazing condition. As a true music lover, the album purchases I made ONLY DUE TO THIS FRAME BEING AVAILABLE has added up! If they don't carry the frames, I'll have no need to buy albums I already own (Miles Davis, The Beatles, Johnny Cash, Jimi Hendrix, and MANY others)! Here's to hoping Target knows how many people have invested money (and the ones who will when learn about them) to have nice looking cohesive frames for large album collections!!!
4 guests found this review helpful. Did you?

5 out of 5 stars
Would recommend
Lifeimitatesart - 8 months ago, Verified purchaser
I love the design of this frame. I also like that it comes in various sizes. I have a wall of music memorabilia and I’ve been able to keep the same design which work really well. The only thing is this one does not have a glass backing to give the floating appearance. Given what I had in it, it doesn’t matter, but I would appreciate the consistency.
5.0
value
out of 5
value: 5 out of 5
4.0
design
out of 5
design: 4 out of 5
5.0
quality
out of 5
quality: 5 out of 5
Did you find this review helpful?

5 out of 5 stars
Would recommend
Ang - 10 months ago, Verified purchaser
Beautiful, simple, chic. Very high quality for the price. Added large mat is a huge bonus. Looks lovely with a black & white vintage photo.
Did you find this review helpful?

5 out of 5 stars
Would recommend
Terry - 10 months ago, Verified purchaser
Delicate gold framing — beautifully enhances your artwork without overpowering (not cheap looking, yet inexpensive).
5.0
design
out of 5
design: 5 out of 5
5.0
value
out of 5
value: 5 out of 5
5.0
quality
out of 5
quality: 5 out of 5
Did you find this review helpful?

4 out of 5 stars
plc - 1 year ago, Verified purchaser
The Frame is really nice. Just wish it matched the ones you carried before. They had black borders. See I have 15 older ones. Now have to paint this one black
1 guest found this review helpful. Did you?

Awesome! You need these!

Exellent product for the price

5 out of 5 stars
Would recommend
KB - 2 years ago, Verified purchaser
These are great! The pieces that hold the back on are flexible to allow for different thicknesses. I was worried only the record itself would fit, but the cover does too, which is what I wanted.
5.0
design
out of 5
design: 5 out of 5
4.0
quality
out of 5
quality: 4 out of 5
5.0
value
out of 5
value: 5 out of 5
7 guests found this review helpful. Did you?