A Big Guy Took My Ball! ( Elephant and Piggie) (Hardcover) - by Mo Willems 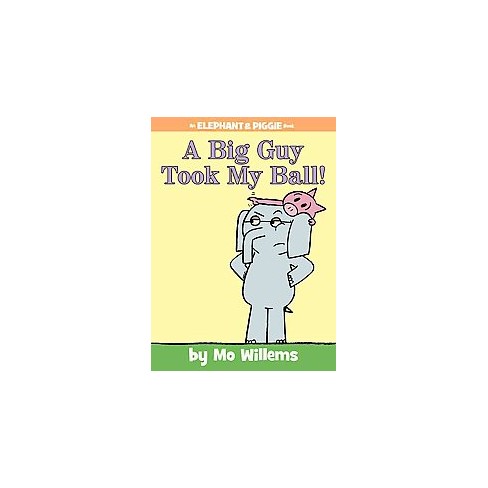 Piggie is happy when she finds a ball, but is soon devastated when a BIG guy takes it from her. What will she and Gerald do?! Elephant & Piggie fans can find out in the pair's 19th adventure! Full color.

Gerald is careful. Piggie is not.
Piggie cannot help smiling. Gerald can.
Gerald worries so that Piggie does not have to. Gerald and Piggie are best friends. In A Big Guy Took My Ball! Piggie is devastated when a big guy takes her ball! Gerald is big, too...but is he big enough to help his best friend?

Gerald the elephant and Piggie return with another playground psychodrama, this one with a twist. Piggie just loved the big ball she just found-"it was so fun!"-but the fun was short-lived, as the titular "big guy came-and-and-and- / HE TOOK MY BALL!" Piggie's distress is so great Gerald is literally bowled over. "That is not right!" he declares. "What makes those big guys think they are so big?!" "Their size?" suggests Piggie. Gerald stalks off the page to give the big guy what-for, but the big guy is "very BIG." In fact, the big guy is a land-going whale, who first thanks Piggie for finding his "little ball" and then laments that no one will play with him because of his extreme size: "LITTLE GUYS HAVE ALL THE FUN." (The whale speaks in all-uppercase letters, though the font changes with his mood; the previous sentence is printed in tiny, all-capped type.) This morality play in false assumptions and relativity unfurls with Willems' customary command of visual pacing; gags are spaced just right to keep the pages turning and readers giggling. His deft exploitation of comic-book conventions sets speech balloons to overlapping and appropriately varying in size. Nineteen books and five Geisel medals or honors along, Elephant and Piggie are still delivering funny, emotionally perceptive stories for just-emerging readers. As the big guy says: "BIG FUN!" (Early reader. 5-8) Kirkus" It's possible that Willems' flagship Elephant & Piggie series might go on forever, and it's also possible that everyone would be okay with that. In this pleasing go-round, Piggie is aflutter after a traumatic incident. After Piggie found a "big ball," a "big guy came" (cue teary-eyed stammering) "and-and-and-HE TOOK MY BALL!" This doesn't sit right with Gerald, who is soon shaking his gray fist in indignance. He stomps off to confront the thief, only to find that, well, "He is very BIG." (Picture the word BIG taking up half the page.) It is a blue whale that towers over our dynamic duo-pretty terrifying stuff until the whale gives readers a lesson on size: it's all relative. If we're quibbling, there's some standing in place going on here as Gerald hems and haws over not getting back the big ball (or "little ball" as its known to the whale). But, as always, Willems' staging of his characters and text across the white background is a master class in economy. Further classes forthcoming? Count on it. HIGH-DEMAND BACKSTORY: Is it time yet to add a second Elephant & Piggie shelf in your library? - Daniel Kraus Booklist" PreS-Gr 1 Once again Willems observes truths about human behavior through the eyes of Gerald, an elephant, and Piggie. The premise this time is that Piggie's recently acquired ball has been snatched by some unknown creature, one so big that Piggie begs Gerald to intervene. But Gerald's perceived power and genuine desire to help his smaller friend cannot provide him with sufficient courage once he sees that he'll have to confront an enormous whale. Outward appearance is rarely a true indicator of inner feelings, though, and the same reality is reflected in the whale, who turns out to be a gentle giant who is remarkably polite. Size should never be a factor in determining friendship, and Willems's two pals are happy to have a new playmate. The story engages readers with delightfully familiar cartoon illustrations and invites them to follow it independently by reading the speech bubbles. This title is a wonderful addition to the series; it's particularly useful for discussions of inside and outside traits, as well as the tricky topic of threesomes. Gloria Koster, West School, New Canaan, CT SLJ" When a big guy takes a ball Piggie found, she appeals to her much bigger friend Gerald for redress. Normally timid Gerald, stung by the injustice, is happy to mount up and ride to the rescue, but he gets more than he bargained for when the big guy turns out to be a whale, literally, who dwarfs the quickly unemboldened Gerald. Fortunately, Gerald and Piggie pool their creative talents to make room for everyone, and harmony is restored. Willems has once again found the sweet spot where humor and situational familiarity meet cognitive capacity; here he introduces perspective through a very familiar playground experience. Introducing comparatives through illustration, font size, and the introduction of the er word ending, he carves out both physical and moral space in the negotiation of the way size matters. The ball and Gerald are big to Piggie, but not to the ball's owner; being big seems to hold all the advantages to our heroes, while being small has more allure for the lonely whale. The ability to see through the eyes of someone who thinks differently than you is an essential developmental leap that's crucial for empathy, and Willems takes it even one step further in creating a game that requires the advantages of both big guys and small guys for its success. The pictures will keep 'em laughing, and the concepts will keep 'em learning, so we say, please, Mr. Willems, keep 'em coming. KC BCCB"

Mo Willems (www.pigeonpresents.com), a number one New York Times best-selling author and illustrator, has been awarded a Caldecott Honor on three occasions (for Don't Let the Pigeon Drive the Bus!, Knuffle Bunny: A Cautionary Tale, and Knuffle Bunny Too: A Case of Mistaken Identity). Don't Let the Pigeon Drive the Bus! was also an inaugural inductee into the Indies Choice Picture Book Hall of Fame. And his celebrated Elephant & Piggie early reader series has been awarded the Theodor Seuss Geisel Medal on two occasions (for There Is a Bird on Your Head! and Are You Ready to Play Outside?) as well as three Honors (for We Are in a Book!, I Broke My Trunk!, and Let's Go for a Drive!).Other favorites include Naked Mole Rat Gets Dressed and City Dog, Country Frog, illustrated by Jon J Muth. See above.