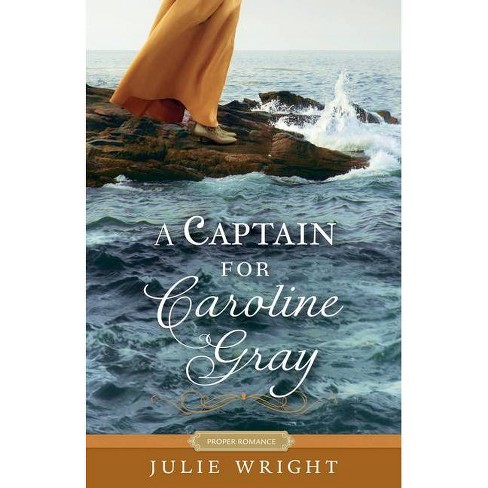 "Caroline Gray is traveling to India in search of a husband, but complications arise when she finds herself falling in love with the captain of the ship she is traveling on"--

Regency London Caroline Gray's third season in London society ends as badly as her first two--no marriage proposal, no suitor, not even a glimmer of an interested prospect. She suspects it's because she is far too quick to speak her mind to men who are put off by her forthright opinions, her eager intellect backed by a formal education, and her unconventional ideas about the future. She is far more daring than demure to suit the taste of her class. Besides, Caroline thinks there will always be next season to find a husband. However, her family's dwindling income leaves Caroline with only one choice to secure her future: a one-way ticket to sail with the Fishing Fleet to India, where the son of a family friend waits. If the match doesn't work, Caroline cannot return home. Captain Thomas Scott loves the thrill of the open sea, and as commander of one of the ships of the "Fishing Fleet," he ferries scores of young English girls to the shores of India to find husbands. The voyages pay well, but he struggles to understand why families would allow young women to be matched with total strangers so far away. The trips have always been routine and uneventful--until this trip's first night's dinner with one Miss Caroline Gray. She engages in a lively political conversation, presenting opposing viewpoints to the conventionally opinionated gentlemen at her table. Captain Scott is secretly amused and delighted at her boldness, not to mention quite drawn to her beauty. The rest of the passengers are shocked by her behavior and Caroline finds herself an outcast, suffering harsh judgments from the other passengers. However, she finds an unlikely ally in Captain Scott which quickly draws them closer. Both know an arranged marriage awaits Caroline at the end of their voyage, yet the attraction between them is undeniable. Caroline will have to decide if she will honor her mother's wishes and marry a man in India whom she has never met--thus securing a future for her and her mother--or be brave enough to throw convention to the wind and commit to love a sea captain. He may be enchanted by her bold and unconventional ways, but will his love and admiration last?

"Wright follows Glass Slippers, Ever After, and Me with a delightful, not exactly traditional Regency romance. Smart, outspoken, progressive, and beautiful, Caroline just can't stop being true to herself, making it hard to secure a husband. Caroline's unusual forthrightness strikes a chord with Captain Thomas Scott, as does her courage during a storm, and she soon acquires his warm regard as well as an enemy, leading to intrigue and danger after their arrival in Mumbai. Wright weaves in Interesting historical detail, creates unique settings, and orchestrates a romance with an emphasis on shared interests, values, and goals, making for a thoughtful and keenly pleasing love story. Teen readers will enjoy this adventurous journey with its proactive heroine and exotic settings."-- "Booklist, starred review"

"An unconventional woman finds herself at home at sea in this stirring Regency from Julie Wright.
Caroline is a worthy protagonist, whose forthrightness contrasts with the strict propriety of the women around her. Caroline's repeated failures to meet the expectations placed on women of the time are endearing and only enhance her relationship with the captain, who similarly struggles to navigate social norms. This adventure is sure to entice fans of historical romance."-- "Publishers Weekly"

"A ship traveling from England to India becomes a microcosm of Regency society in Wright's touching novel. Thomas and Caroline discuss women's rights and fair trade...their exchanges lead to sparks. They speak their minds and stoke their mutual intellectual attraction. Romance on the high seas may be a high-risk proposition for Caroline, but her discovery of new freedoms makes those risks worth taking. A charming historical romance in which smarts and sass are vindicated."-- "Foreword Reviews"

Julie Wright wrote her first book when she was fifteen, and has since written twenty-three novels. She loves writing, reading, traveling, speaking at schools, hiking, playing with her kids, and watching her husband make dinner.
If the item details above aren’t accurate or complete, we want to know about it. Report incorrect product info.