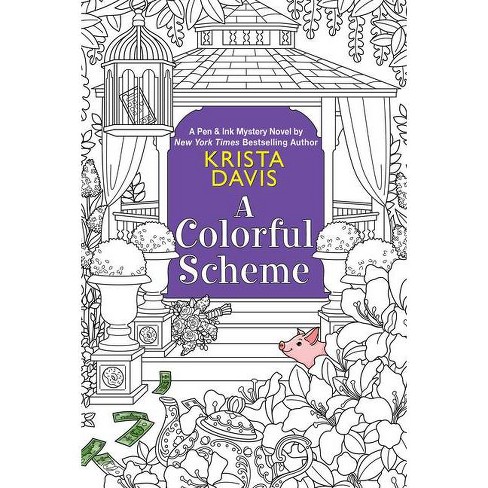 New York Times bestselling author Krista Davis's fourth cozy mystery with a color-it-yourself cover finds Florrie Fox, the manager of Color Me Read Bookstore, attending her boss's wedding to a well-known romance novelist. But when a guest turns up dead, all bets are off on the happily ever after! Includes A Front and Back Cover for You to Color! Coloring book creator and Washington, DC, bookstore owner Florrie Fox is attending the wedding of her wealthy boss and a famous romance author, who are taking their vows--for the second time--on the grounds of the gorgeous Maxwell mansion. But it soon becomes clear that the soothing vibe of coloring books is very different from the stress and backstabbing in some corners of the literary world. Arthur Bedlingham, for example, barely makes a living despite the many awards he's won--and his chances for better sales haven't been helped by the vicious review he just got from another guest at the party. Then there's an ex-FBI agent whose popular thrillers are a magnet for female fans; a less-successful romance writer; and an ambitious waitress who's intent on a career in journalism. When Arthur's assistant, an aspiring writer, is murdered during the festivities, Florrie realizes this is no color-by-numbers case, and she'll have to sort out the complicated secrets among this creative crowd of suspects...

Krista Davis is the New York Times bestselling author of the Domestic Diva Mysteries, the Pen & Ink Mystery series and the Paws & Claws Mysteries. Several of her books have been nominated for the Agatha Award. Krista lives in the Blue Ridge Mountains of Virginia with two cats and a brood of dogs. Her friends and family complain about being guinea pigs for her recipes, but she notices they keep coming back for more. Please visit her at KristaDavis.com.
If the item details above aren’t accurate or complete, we want to know about it. Report incorrect product info.