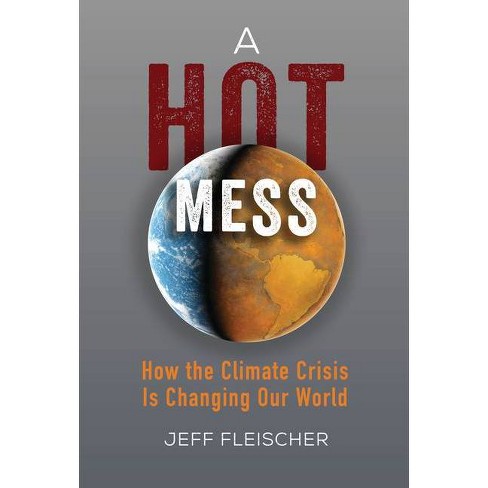 We already know what climate change is and many of us understand the human causes. But what will climate change do to our world? Who will be affected (spoiler: all of us!) and how will our lives change in the future? Topics include sea levels, extreme weather, drought, animal and plant extinction, and human and animal migration. Drawing on real-life situations and stories, journalist Jeff Fleischer takes an informed, approachable look at how our world will likely change as a result of our actions, including suggestions on what we can still do to slow down these unprecedented effects.

As the consequences of climate change become increasingly dire, there's a crucial need for up-to-date information. This science-and-social-studies crossover offers a global perspective of climate-related developments, showing how weather extremes have ecological, political, economic, and social repercussions that ripple across continents. Chapters concentrate on individual factors, providing the science behind concerns like rising sea levels, drought and forest fires, and vanishing environments; the narrative integrates these consequences into everyday-living scenarios, often doubling back to reinforce situations from previous pages. Chapters begin with a quote and are filled with maps, charts, insets, and photos, and there are chapter notes, a selected bibliography, and an annotated list of sources for further information. A final chapter, aptly introduced with a Greta Thunberg quote, concentrates on solutions, ranging from local (beach cleanups, roof farms) to national (the Biden administration's creation of a cabinet-level 'climate envoy' position) to international (the Montreal Protocol to save the ozone layer). This is a documented, balanced, and accessible update on an evolving crisis.--Booklist

An in-depth discussion of how climate change is affecting our world.

Numerous recent publications for young readers address the topic of climate change. By now, much of the information provided here regarding human causes is not new. However, the personal approach is: Fleischer begins with a discussion of Tuvalu, an island nation in the South Pacific that is losing land to climate change. In 2008, he traveled there on a journalism grant to study the effects on its inhabitants, including their fears about having to relocate when their country becomes uninhabitable, possibly within our lifetimes. The author then dives into an in-depth discussion of what climate change is; how climate change is impacting lives around the world; how it contributes to drought, fires, flooding, loss of habitat, and disease; and what can be done at this point to stop the damage. In summary, the book encourages young people to learn about these critical issues and then do something about them. To support his claims, Fleischer uses specific examples, recent scientific studies, maps, and informative sidebars, such as a poignant story regarding a koala that was trapped in the devastating Australian bushfires of 2019 and 2020. Additionally, the author's conversational tone that includes the occasional pun will resonate well with the target audience.

A wealth of information and an engaging approach are certain to have a lasting impact.--Kirkus Reviews

Jeff Fleischer's A Hot Mess is a substantial, science-based guide that explains climate change through history, its deniers, and the current evidence, all in a candid, accessible format that invites young people to take action.

With a journalist's knack for finding the human angle behind compelling issues, Fleischer begins with the Tuvalu Islanders, whose livelihoods are threatened by rising sea levels, and whose story is a signpost of the climate crisis. This dynamic introduction illuminates how the 'worst-case forecasts' have already arrived, setting the stage for a skillful blend of honed facts and historical overviews, from industrialization to modern politics and its too-frequent deference to energy companies. The result is an incisive portrait of how people arrived at a pivotal moment.

The chapters cover basic terminology, such as the difference between weather and climate; the effects of droughts, wildfire devastation, rising sea levels, and glacier melts; and the fallout on the animal world, including coral bleaching. References to extreme weather events in the recent past build a convincing message about climate change's pervasiveness, while crisp sidebars enrich the subject. It's the powerful section on the humanitarian crisis and climate refugees, though, that's most urgent, as it's here that the impact of wealthier nations' choices comes to roost.

Without downplaying consequences of people's actions, the book's tone is cautionary, yet not defeating. It addresses the mistaken belief that it's too late with the apt, practical message that even if that's true about certain problems, 'that's no reason not to try stopping' elsewhere, since 'we have to live with the outcome either way.' Suggestions for concrete actions to reduce carbon footprints and useful resources conclude the book.

A Hot Mess is an unvarnished introduction to climate change that's refreshing about sharing the supporting science.--Foreword Reviews

We Are All Made of Molecules - by Susin Nielsen (Paperback)

The Watchmaker at the Waterholes - 2nd Edition by Jeff Wilmot (Paperback)