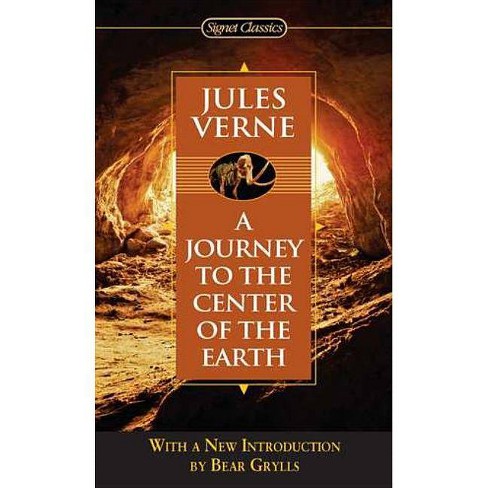 One of the all-time greatest works of the science fiction genre, this edition of Verne's classic tale includes an Afterword written by Nimoy, known to generations as Mr. Spock from "Star Trek, " and an Introduction by Grylis, author of "Born Survivor." Revised reissue.

From the discovery of a strange parchment in an old bookseller's shop to the fantastic descent through a dormant volcano into a subterranean world of danger and beauty, A Journey to the Center of the Earth is as wonderfully entertaining today as when it was first published. One of Jules Verne's finest novels, its unique combination of "hard" science and vivid imagination helped establish this brilliant Frenchman as the father of modern science fiction. A high-tension odyssey, it depicts three men who venture into an unknown, fearsome underworld to discover what lies at the mysterious center of the earth--while risking their chances of ever returning to the surface alive. With an Introduction by Bear Grylls
and an Afterword by Leonard Nimoy

"Verne's imagination has given us some of the greatest adventure stories of all time."
"-- Daily Mail

""Journey to the Centre of the Earth is one of the most famous novels ever written. Verne has left us an extraordinary book, which has withstood the test of time better than some of the science described within it. It has brought delight to generations of readers, and will for many more. There is nothing so rare as the chance to take an impossible journey, and to believe it so powerfully that we wonder if we will make it out alive. That's magic. And that's Verne's gift."
"--"Michael Crichton, "Daily Telegraph"

"Fantasised a parallel world to ours under the earth's crust. This hypothesis was both popular and subscribed to, even by reputable scientists, in the 19th century. Verne's tale... remains the best of its (scientifically) preposterous kind."
"--"John Sutherland, "Guardian"

Jules Verne, born at Nantes, France, in 1828, of legal and seafaring stock, was the author of innumerable adventure stories that combined a vivid imagination with a gift for popularizing science. Although he studied law at Paris, he devoted his life entirely to writing. His most popular stories, besides 20,000 Leagues Under the Sea (1870), include: Five Weeks in a Balloon (1863), Journey to the Center of the Earth (1864), A Trip to the Moon (1865), Around the World in Eighty Days (1872), and Michael Strogoff (1876). In addition, he was the author of a number of successful plays, as well as a popular history of exploration from Phoenician times to the mid-nineteenth century, The Discovery of the Earth (1878-80). After a long and active career in literature, Jules Verne died at Amiens, France, in 1905.
If the item details above aren’t accurate or complete, we want to know about it. Report incorrect product info.