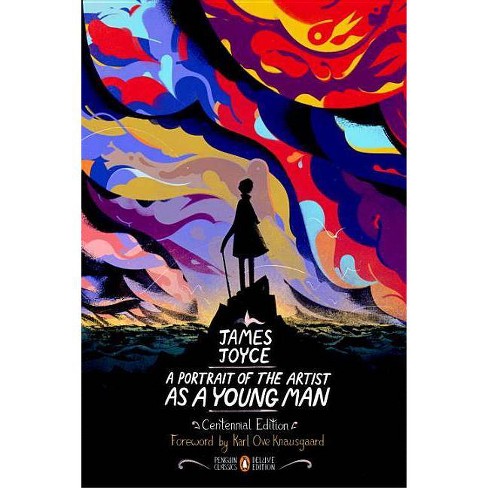 The story of the childhood and youth of an Irish poet-scholar, Stephen Dedalus, who questions his Catholic faith as he reaches manhood in turn-of-the century Dublin.

For the centennial of its original publication, a beautiful Deluxe Edition of one of Joyce's greatest works--featuring an introduction by Karl Ove Knausgaard, author the New York Times bestselling six-volume autobiographical novel My Struggle, which has been likened to a 21st-century Portrait of the Artist as a Young Man The first, shortest, and most approachable of James Joyce's novels, A Portrait of the Artist as a Young Man portrays the Dublin upbringing of Stephen Dedalus, from his youthful days at Clongowes Wood College to his radical questioning of all convention. In doing so, it provides an oblique self-portrait of the young Joyce himself. At its center lie questions of origin and source, authority and authorship, and the relationship of an artist to his family, culture, and race. Exuberantly inventive in style, the novel subtly and beautifully orchestrates the patterns of quotation and repetition instrumental in its hero's quest to create his own character, his own language, life, and art: "to forge in the smithy of my soul the uncreated conscience of my race." This Penguin Classics Deluxe Edition, published for the novel's centennial, is the definitive text, authorized by the Joyce estate and collated from all known proofs, manuscripts, and impressions to reflect the author's original wishes. For more than seventy years, Penguin has been the leading publisher of classic literature in the English-speaking world. With more than 1,500 titles, Penguin Classics represents a global bookshelf of the best works throughout history and across genres and disciplines. Readers trust the series to provide authoritative texts enhanced by introductions and notes by distinguished scholars and contemporary authors, as well as up-to-date translations by award-winning translators.

"Magical . . . A coming-of-age story, perhaps the prime example of that genre in English literature . . . Even now, twenty-seven years after reading it for the first time, its moods come back to me." --Karl Ove Knausgaard, from the Foreword "One believes in Stephen Dedalus as one believes in few characters in fiction." --H. G. Wells "[Mr. Joyce is] concerned at all costs to reveal the flickerings of that innermost flame which flashes its myriad message through the brain, he disregards with complete courage whatever seems to him adventitious, though it be probability or coherence or any other of the handrails to which we cling for support when we set our imaginations free." --Virginia Woolf "[A Portrait of the Artist as a Young Man will] remain a permanent part of English literature." --Ezra Pound

James Joyce (1882-1941), an Irish poet and novelist, was one of the most celebrated writers of the twentieth century. His works include Ulysses, Dubliners, and Finnegans Wake. Karl Ove Knausgaard (foreword) is the author of the New York Times bestselling six-volume autobiographical novel My Struggle, a global literary phenomenon that has won numerous international literary awards and has been translated into more than twenty-five languages. He was born in 1968 in Oslo, Norway, and now lives in Sweden. Seamus Deane (introduction and notes), professor of English and the Donald and Marilyn Keough Professor of Irish Studies at the University of Notre Dame, is a member of the Royal Irish Academy and the general editor of the works of James Joyce for Penguin Classics.

Roman Muradov (cover illustrator) has done illustrations for an array of clients, including The New Yorker, The New York Times, Vogue, NPR, and Dark Horse Comics. He lives in San Francisco.