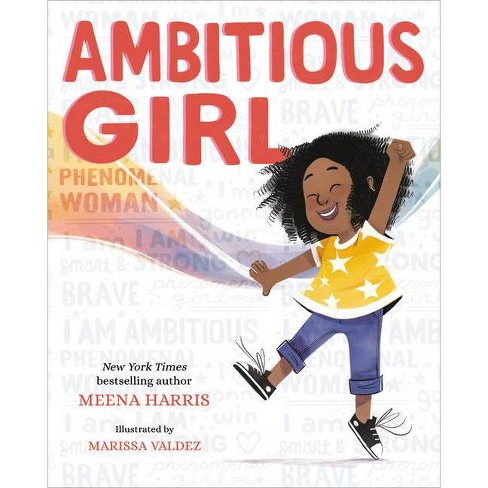 A girl sees a woman labeled as having too much ambition, but when the girl considers its definition she finds herself inspired and realizes ambition is required to make changes to the world and have her voice be heard.

INSTANT #1 NEW YORK TIMES BESTSELLER!
INSTANT #1 INDIEBOUND BESTSELLER! Anyone who's ever been underestimated or overshadowed will find inspiration in this empowering new picture book from Meena Harris, New York Times-bestselling author of Kamala and Maya's Big Idea. When a young girl sees a strong woman on TV labeled as "too assertive" and "too ambitious," it sends her on a journey of discovery through past, present, and future about the challenges faced by women and girls and the ways in which they can reframe, redefine, and reclaim words meant to knock them down. As Ambitious Girl says: No "too that" or "too this"will stop what's inside us from flowering.

"A pep talk, a call to action, and a beautiful story. This book reminds me of so many bedtime conversations my mother and I had when I was growing up. Our girls are powerful and limitless."

--America Ferrera, Activist, actor, producer, and director "Harris and Valdez's appreciable celebration of female ambition begins with a televised broadcast of a Black female speaker being labeled 'too assertive, too persistent, too ambitious, too loud.' In Valdez's bright, largely unlined art, a brown-skinned girl, who walks up the street with three older Black women, is not discouraged by what she sees.... Her mother explains that historical figures, shown in a navy wash, 'have opened so many doors, ' paving the way for this child's hopes and desires to flourish."--Publishers Weekly "This story will enable all girls, no matter their background, culture, or ability, to see that they are able to make a difference and to stand up for what they believe in."--School Library Connection "The soft watercolor illustrations amplify the book's underlying messages of love and hope, filling the backgrounds with a multiracial cast of women diverse in age, sexuality, ethnicity, and ability. An inspiring, rhyming ode to female ambition."--Kirkus Reviews

"Ambitious Girl is such an important children's book, because it defines ambition in different terms than we're used to. We are so often told ambition is a drive toward professional success, but Ambitious Girl knows it's so much more -- it's a drive toward owning your life and humanity. When we, especially girls, are taught about ambition it often comes with an inherent competition, that there's only one slot available. I love that this book breaks that myth. I know Meena and her family live by these beliefs, and I'm so grateful she has put it down in beautiful words to share with the rest of us."

"Being ambitious means daring to be different and being willing to break the mold. That can be scary, but with Ambitious Girl by her side, young girls will know they can do anything."

"I love that Ambitious Girl both shows and tells--it shows a girl who looks like my own daughter and tells her, and her brother, that women's ambition is powerful and something to be celebrated."

"In a complex world, Ambitious Girl is a powerful way to talk to kids, especially Black and Brown children, about overcoming stereotypes and owning your confidence. I am so happy to see us represented on the page, and I can't wait to give this book to every young person in my life--and a few older readers as well!"

"Meena writes an ambitious story for persistent girls who are routinely told they don't matter. Kids deserve books where they can see themselves, their potential for greatness, and the power of dreaming big. Ambitious Girl is one of those treasures of a picture book--it entertains, it educates, it's a must read."

"When I learned about the water crisis in my hometown of Flint, I didn't have many young role models who looked like me. But I did what any ambitious girl would do and took that first step. I love that Ambitious Girl will encourage the next generation of young female activists to speak up and not back down."

--Mari Copeny, 13-year-old Activist and Philanthropist "Ambitious Girl is not just beautiful for its text, it's also one of the first times I've seen the ambition of girls of color centered and celebrated. I look forward to making this book a regular bedtime affirmation in our house."--Jessica Alba, Entrepreneur, Advocate, Actress, New York Times bestselling author, and Founder of The Honest Company "A nourishing, necessary story for girls to harness their inner heroines, make them come alive off the page, and thrive in real life."--Amber Tamblyn, Author and Actress "Have you ever sobbed into a children's book? I have and that book is Ambitious Girl. It was the empowerment and good cry of relief I deserve. I'll be requiring every girl and woman in my life to read it, and I'd love for every boy, man, and being in this world to read it with us too."--Liza Koshy, Actress, Creator, Producer "The quick moral? Don't let the world judge you--'You tell them who you are.' The story is inclusive of all girls and some nonbinary folk in uplifting illustrations that shout the lessons, that 'too' is darkly overwhelming, but women before her have opened doors. Here, also, is the quote children everywhere have been learning in this political season--'You may be the first someday, but don't be the last--make space for more!'"--School Library Journal "This wonderful book tells young girls what we have ALL needed to hear but haven't heard nearly enough: Ambition is good, and girls who are ambitious achieve great things and help others. This delightful book is a must read for every little girl."--Padma Lakshmi, Author, UNDP Goodwill Ambassador and ACLU Artist Ambassador for Immigrant and Women's Rights project

Meena Harris was born into a family of ambitious women whose legacy continues to inspire her. Meena herself is a lawyer and entrepreneur, as well as a #1 New York Times-bestselling author. In 2017 she founded Phenomenal, a female-powered organization that brings awareness to social causes. She currently resides in San Francisco with her partner and two daughters. Marissa Valdez grew up on the South Texas border, dreaming that one day she'd be drawing for her job. Marissa graduated with a BFA in Animation from the Massachusetts College of Art and Design and has worked as a preschool teacher, graphic designer and freelance illustrator since. Marissa hopes that her work encourages young girls to be ambitious and to dream big. She lives in Houston, Texas with her two ambitiously large cats. You can learn more about her at marissavaldez.com.
If the item details above aren’t accurate or complete, we want to know about it. Report incorrect product info.