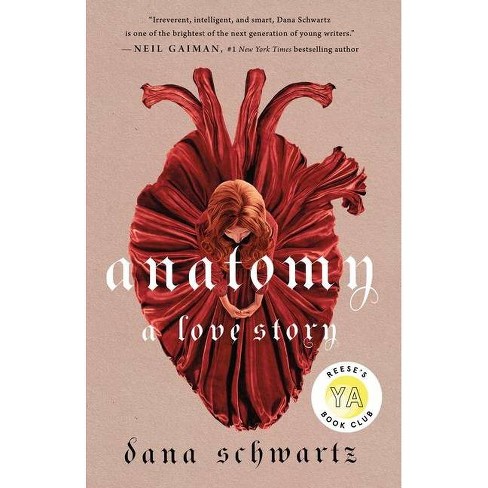 Hazel Sinnett is a medical student in 19th century Scotland who, after being kicked out because of her gender, works with new attractive acquaintance Jack Currer to procure dead bodies to study, but they soon discover secrets buried in the heart of Edinburgh society.

Schwartz's magical novel is at once gripping and tender, and the intricate plot is engrossing as the reader tries to solve the mystery. She doesn't miss a beat in either the characterization or action, scattering clues with a delicate, precise hand. This is, in the end, the story of the anatomy of the human heart. - Booklist (starred review)

Dana Schwartz's Anatomy: A Love Story is a gothic tale full of mystery and romance.

Hazel Sinnett is a lady who wants to be a surgeon more than she wants to marry. Jack Currer is a resurrection man who's just trying to survive in a city where it's too easy to die. When the two of them have a chance encounter outside the Edinburgh Anatomist's Society, Hazel thinks nothing of it at first. But after she gets kicked out of renowned surgeon Dr. Beecham's lectures for being the wrong gender, she realizes that her new acquaintance might be more helpful than she first thought. Because Hazel has made a deal with Dr. Beecham: if she can pass the medical examination on her own, Beecham will allow her to continue her medical career. Without official lessons, though, Hazel will need more than just her books--she'll need corpses to study. Lucky that she's made the acquaintance of someone who digs them up for a living. But Jack has his own problems: strange men have been seen skulking around cemeteries, his friends are disappearing off the streets, and the dreaded Roman Fever, which wiped out thousands a few years ago, is back with a vengeance. Nobody important cares--until Hazel. Now, Hazel and Jack must work together to uncover the secrets buried not just in unmarked graves, but in the very heart of Edinburgh society.

Irreverent, intelligent and smart, Dana Schwartz is one of the brightest of the next generation of young writers. --Neil Gaiman, #1 New York Times bestselling author

Schwartz's magical novel is at once gripping and tender, and the intricate plot is engrossing as the reader tries to solve the mystery. She doesn't miss a beat in either the characterization or action, scattering clues with a delicate, precise hand. This is, in the end, the story of the anatomy of the human heart. - Booklist (starred review) A fast-paced, utterly engrossing tale of mystery, romance, and cadavers. Dana Schwartz deftly blends the historical with the supernatural, racing from macabre graveyards to Scottish castles with two compelling young heroes I dare you not to root for. I grinned, I gasped, I cried and ended this book breathless and craving more." --Alwyn Hamilton, New York Times bestselling author of the Rebel of the Sands series "Diabolically delightful. A love story, a murder mystery, and a horror novel bound up together in ghoulish stitches. --Maureen Johnson, New York Times bestselling author of the Truly Devious trilogy Lionhearted heroine you'll root for from page one? Check. Dark academia vibes? Check. Cheeky romantic banter that will make you blush? Check, check and CHECK. Read this gripping, ridiculously clever tale only if you're fully prepared to be haunted by its revelations about life and death while also swooning at the idea of flirting with someone in an open grave. --Emma Lord, New York Times bestselling author of You Have a Match and Tweet Cute ...an intimate look at how society decides who is worth healing and who is worth exploiting in the name of science. - Bulletin for the Center of Children's Books Praise for And We're Off: A Seventeen Magazine Best Book of the Year "A winsome, hilarious tale about losing the map and finding a better way to a happy ending. I loved it!" --#1 New York Times bestselling author Jennifer Weiner "And We're Off is sure to steal your heart and inspire some serious wanderlust."--HelloGiggles "Fun, poignant, and funny. I want to travel with Dana, and after reading this, so will you." --New York Times and USA Today bestselling author Maureen Johnson [Schwartz] deftly mixes humor and tenderness....This funny, whimsical tome isn't easy to put down once you start. --Rolling Stone Praise for Choose Your Own Disaster: This long-form personality quiz manages to combine humor with unflinching honesty as one young woman tries to find herself amid the many, many choices that your twenties have to offer. --Bustle Equal parts amusing and cringe-worthy, these stories will have millennial readers relating and older ones nodding, 'Yes. I've made similar mistakes.--Library Journal The snappy direct address gives the feel of a playful internet bit, is sure to please Schwartz's loyal fans. --Booklist What do millennials love more than a quiz? NOTHING (except for killing off the diamond and napkin industries). That's part of what makes Dana Schwartz's unflinching, hilarious, and feminist memoir, Choose Your Own Disaster, such a fun ride. --PopSugar Choose Your Own Disaster is a salted caramel of a memoir. Her travails as an early 20-something aspiring writer/rom-com character are the perfect mixture of salty and sweet. --The Washington Post

Dana Schwartz is a television writer and the creator of the number-one charting history podcast Noble Blood. As a journalist and critic, Dana has written for Entertainment Weekly, Marie Claire, Glamour, GQ, Cosmopolitan, Vanity Fair and more. She lives in Los Angeles with her fiancé, and their cats Eddie and Beetlejuice. Her books include Choose Your Own Disaster, The White Man's Guide to White Male Writers of the Western Canon, and Anatomy: A Love Story.
If the item details above aren’t accurate or complete, we want to know about it.

Better Than the Movies - by Lynn Painter

Everything I Never Told You (Reprint) (Paperback) by Celeste Ng

The Last Legacy - by Adrienne Young

Enola Holmes and the Black Barouche - by Nancy Springer

You Have a Match - by Emma Lord

5 out of 5 stars
Would recommend
hippydrops - 7 months ago, Verified purchaser
While the book was a tad hard to read at first, I quickly fell in love with Hazel. She’s the strong woman everyone wants to be. I’d recommend this book to anyone wishing for a little bit of happiness and joy in their lives.
Did you find this review helpful?

5 out of 5 stars
Would recommend
Billie - 9 months ago, Verified purchaser
The cover , the story , the ending 10/10 I need a sequel asap !
1 guest found this review helpful. Did you?

5 out of 5 stars
Would recommend
plzcovermyarms - 9 months ago, Verified purchaser
I'm a Huge Science Nerd And Love Anatomy. This Book Has Everything.
Did you find this review helpful?

5 out of 5 stars
Would recommend
V - 9 months ago
A romance book that’s much more than a romance book
1 guest found this review helpful. Did you?

5 out of 5 stars
Literary Laura - 1 year ago, Verified purchaser
What I Thought: This book is a ghastly delight, filled with phantasmagorical imagery supported by a feminist structure. The short, quick chapters make Anatomy easy to read. The subject is somewhat gory but in a way that is more likely to entertain than disgust the reader. Author Dana Schwartz has a penchant for word choice that borders on the lyrical. For example, about Hazel: “From the time she was able to write her own name, she had wanted to study the body, to learn the rules that governed it, to understand how to master it: this strange vessel that contained our souls.” Who: Teenager Hazel Sinnett, a Scottish noblewoman, longs to become a surgeon. What: Hazel enrolls in a rigorous medical training program, armed with the knowledge from her father’s well-stocked library. When her disguise fails to conceal her true identity –that of a woman—she makes a deal with the doctor in charge of the program. If she can pass the exam at the culmination of the training, he will help her get credentialed as a surgeon. When: Early 1800s. Where: Edinburgh, Scotland. How: The book-learning, rote memorization, is easy for Hazel. But when it comes to the hands-on aspects of technique, Hazel is at a disadvantage. That is, until she meets Jack Currer, a “resurrection man” and part of the underground economy in Edinburgh. Doctors need bodies to study, and Jack will steal those bodies from graveyards, for a price. As Hazel and Jack begin working together, Hazel investigates the disappearance of some of Jack’s friends from the streets of the Old Town, and the mysterious injuries Jack has seen on his recent resurrections. More thoughts on Anatomy: In Hazel Sinnett, Schwartz has created a masterful narrator to keep readers engaged. Schwartz describes the time period, which is quite foreign to young people growing up today, in which a teenage woman of noble blood must have an escort to take her safely around outside of her household. Our protagonist Hazel ventures out on her own after her mother and surviving brother leave home out of fear of the returning Roman Fever, and she vows to sit for her exams before Christmas, when she will be expected to reunite with them prior to the socialization season. Our heroine is clever, witty, and motivated. She cares not for social niceties and blossoms before the reader’s eyes as she learns to look out from her carriage and see the world that actually exists, not just the rooms that she used to inhabit. While this is a Young Adult book, I found it handled real life themes more appropriately than many books that portend to be for grownups actually do. Hazel finds she is forced to choose between the career she thinks picked her and the life her mother says she is lucky to have –that of a Viscountess, with a household to manage and a husband to please. Hazel’s parents are key to the narrative, both in their noble status and in their absentia. If Hazel’s father wasn’t a man to whom books and knowledge were of utmost importance, Hazel likely wouldn’t have grown up to be so entranced with the written word. If her mother hadn’t spent years mourning her deceased eldest son, perhaps she would have treated Hazel differently. As it is, however, Hazel is left to fend for herself, and she greatly prefers studying the body’s cardiovascular system to deciding which color gown to wear to the next costume party at which her attendance is expected. All in all, I adored this book, found it to be an enjoyable read, and went back to read the last few sections a second time as they were filled with hidden gems. Highly recommend, five stars.
7 guests found this review helpful. Did you?