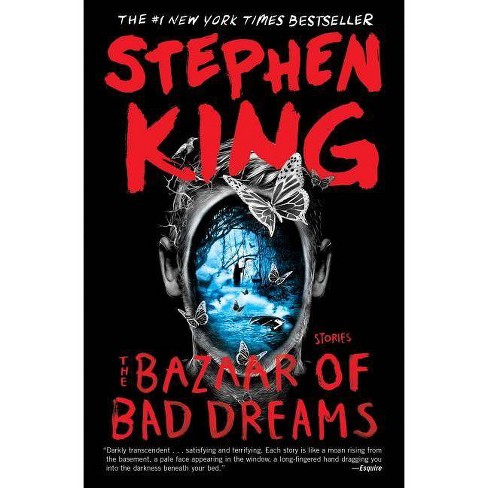 "From a master of the short story, a collection that includes stories never before in print, never published in America, never collected and brand new- with the magnificent bones of interstitial autobiographical comments on when, why and how Stephen King came to write each story"--

Includes the story "Premium Harmony"--set in the fictional town of Castle Rock, Maine The masterful #1 New York Times bestselling story collection from O. Henry Prize winner Stephen King that includes twenty-one iconic stories with accompanying autobiographical comments on when, why and how he came to write (or rewrite) each one. For more than thirty-five years, Stephen King has dazzled readers with his genius as a writer of short fiction. In this new collection he introduces each story with a passage about its origins or his motivations for writing it. As Entertainment Weekly said about this collection: "Bazaar of Bad Dreams is bursting with classic King terror, but what we love most are the thoughtful introductions he gives to each tale that explain what was going on in his life as he wrote it. There are thrilling connections between stories; themes of morality, the afterlife, guilt, what we would do differently if we could see into the future or correct the mistakes of the past. In "Afterlife," a man who died of colon cancer keeps reliving the same life, repeating his mistakes over and over again. Several stories feature characters at the end of life, revisiting their crimes and misdemeanors. Others address what happens when someone discovers that he has supernatural powers--the columnist who kills people by writing their obituaries in "Obits;" the old judge in "The Dune" who, as a boy, canoed to a deserted island and saw names written in the sand, people who then died in freak accidents. In "Morality," King looks at how a marriage and two lives fall apart after the wife and husband enter into what seems, at first, a devil's pact they can win. "I made these stories especially for you," says King. "Feel free to examine them, but please be careful. The best of them have teeth." Stories include:
-Mile 81
-Premium Harmony
-Batman and Robin Have an Altercation
-The Dune
-Bad Little Kid
-A Death
-The Bone Church
-Morality
-Afterlife
-Ur
-Herman Wouk Is Still Alive
-Under the Weather
-Blockade Billy
-Mister Yummy
-Tommy
-The Little Green God of Agony
-Cookie Jar
-That Bus Is Another World
-Obits
-Drunken Fireworks
-Summer Thunder

Stephen King is the author of more than sixty books, all of them worldwide bestsellers. His recent work includes If It Bleeds, The Institute, Elevation, The Outsider, Sleeping Beauties (cowritten with his son Owen King), and the Bill Hodges trilogy: End of Watch, Finders Keepers, and Mr. Mercedes (an Edgar Award winner for Best Novel and an AT&T Audience Network original television series). His novel 11/22/63 was named a top ten book of 2011 by The New York Times Book Review and won the Los Angeles Times Book Prize for Mystery/Thriller. His epic works The Dark Tower, It, Pet Sematary, and Doctor Sleep are the basis for major motion pictures, with It now the highest-grossing horror film of all time. He is the recipient of the 2020 Audio Publishers Association Lifetime Achievement Award, the 2018 PEN America Literary Service Award, the 2014 National Medal of Arts, and the 2003 National Book Foundation Medal for Distinguished Contribution to American Letters. He lives in Bangor, Maine, with his wife, novelist Tabitha King.
If the item details above aren’t accurate or complete, we want to know about it. Report incorrect product info.