Because I'm Your Dad (Hardcover) by Ahmet Zappa 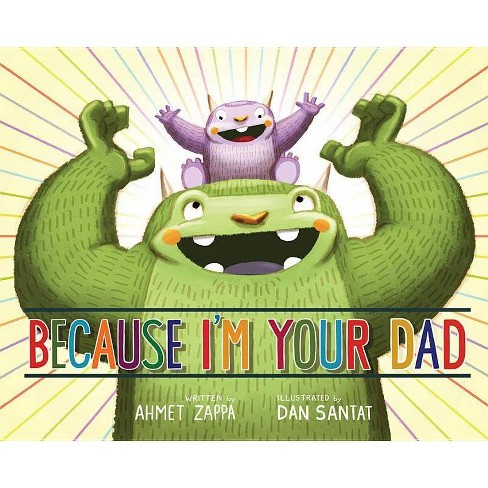 In a text that's both playful and loving, a father expresses his hopes and dreams for a one-of-a-kind relationship with his child. Whimsical monster characters bring the silly and sweet scenes to life and keep the book universal. Full color.

Because I'm your dad, you can have spaghetti for breakfast, French toast for dinner, and rocky road ice cream in the bathtub. In a text that's both playful and loving, a father expresses his hopes and dreams for a one-of-a-kind relationship with his child. Whimsical monster characters bring the silly and sweet scenes to life and keep the book universal. The book's ending, a moving tribute to the author's father, guarantees intergenerational appeal. Because I'm your dad, I will do all of these things for you and more . . . because that's what my dad did for me.

A rowdy catalogue of Dad moments gets enacted by a creature who resembles a green '60s-era Nauga monster and his purple (gender-neutral) offspring, in this picture book from the son of the late Frank Zappa (and a father himself). It quickly becomes clear that this dad is all about noise, mischief, and good times: "Because I'm your dad, I'm going to teach you how to burp like a champion," writes Zappa as parent and child deliver toothy, wide-mouthed belches; other escapades include rocky road ice cream baths, rocking out on drums, missing school for trips to New York City and Australia, and "sometimes stay[ing] up late with me to watch TV." Throughout, Zappa and Santat maintain an entertaining balance between sweet and goofy, protective and raucous. Ages 1 5. PW" K-Gr 1 Zappa presents a daddy monster who tickles, plays games, plans fun-filled excursions, and offers spaghetti for breakfast and ice cream in the tub. He evinces a generally goofy persona that allows for plenty of mud and burping along with cuddles and care. Young children will probably giggle and warm up to the monster dad, who appears more silly than scary in Santat's exuberant illustrations. However, there isn't much story line beyond the list of pledges that the grown-up makes to his child, based, as he explains in the end, on the parenting he himself received. And while the family depicted seems recognizable, it is familiar in a stereotypical TV sitcom kind of way. Purchase if there is a need for additional tributes to dads. Gloria Koster, West School, New Canaan, CT SLJ" Unabashed sentimentality dominates the text in this loving promise from a father to his child. What saves this title from being just a syrupy pronouncement are the characters. Santat has good fun creating scenes for two hairy, horned monsters, the dad pickle green and the child a pleasing purple. The somewhat cuddly pair is comically shown participating in their less-than-ordinary activities like "having spaghetti for breakfast, French toast for dinner, and rocky road ice cream in the bathtub." They play with robots, listen to really loud music, burp like champions and miss school to visit New York to share a hot dog. Readers will smile at the low-key humor in the pictures. The page stating, "Because I'm your dad, you can sometimes stay up late with me to watch TV" depicts the father asleep while the child sits on the sofa terrified by what is on the screen. Warm moments abound, as when little monster is rolled up by her father in a blanket like a burrito or when the dad checks the closet and under the bed for monsters. Zappa wrote this story for his daughter, and it overflows with genuine fatherly affection that he would like to pass on, since his father (avant-garde rocker Frank Zappa) did the same for him. Funny though the illustrations are and loving though the text is, the book falls short due to lack of nuance. (Picture book. 2-5) Kirkus"

Ahmet Emuukha Rodan Zappa is the son of late rock musician/composer Frank Zappa and, as he puts it, "My awesome mother, Gail." Because I'm Your Dad is both a tribute to his happy childhood and a promise to his daughter, Halo. Ahmet grew up with a learning disability and now writes books to help children discover how wonderful reading can be. He and his wife, Shana, are currently collaborating on a new book series, Star Darlings. Through his production company, Monsterfoot Productions, Ahmet has developed several television shows and movies, including "The Odd Life of Timothy Green." Ahmet, Shana, and Halo live in Los Angeles, California under a rainbow with their three fur goblins Sandwich, Luna, and Figgy. For more information, visit www.ahmetzappa.com. Dan Santat (www.dantat.com) is the author and illustrator of Guild of Geniuses and the illustrator of many books, including Oh, No! and Oh, No! Not Again! by Mac Barnett, and Always Lots of Heinies at the Zoo by Ayun Halliday. He is also the creator of Disney's animated hit, The Replacements. Dan lives in Southern California with his wife, two kids, a rabbit, a bird, a cat, and a dog.
If the item details above aren’t accurate or complete, we want to know about it. Report incorrect product info.