Blame It on Scotland - (Kilts and Quilts) by Patience Griffin (Paperback) 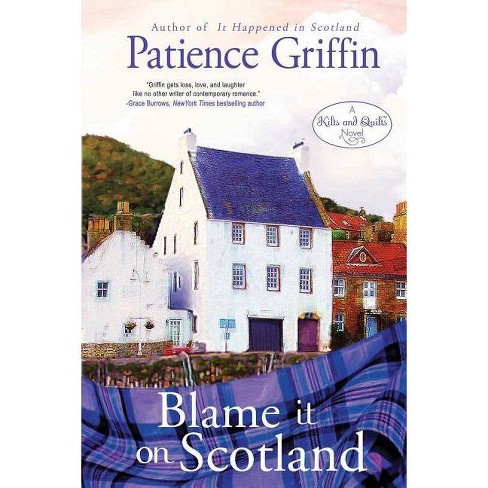 Scotland is known for bringing reluctant hearts together... Tuck is plagued with guilt over a maimed fisherman. Ryn struggles to fulfill her mother's last request and return a quilt to her long lost cousin. Will Ryn and Tuck be willing to bridge the chasm between them for true love? If they do, they will only have Scotland to blame...

From the author of It Happened in Scotland--a charming new romance set in the magical Scottish Highlands.

The quilters of Gandiegow expand more than their quilting enterprise into the village of Whussendale. They bring along a heavy dose of good-hearted meddling, too. What's the outcome? Love will never be the same...

When Tuck MacBride, Gandiegow's favorite scapegoat, is blamed for a fisherman's tragic accident, Tuck takes on extra work to secretly funnel his earnings to the maimed fisherman's family. Haunted by the mistaken turn of events, Tuck is working night and day. Even so he can't stop thinking about the new lass who has just arrived in town.

Ryn Breckenridge has no one left in the world. To fulfill her mother's last request, Ryn travels to Scotland to return a quilt to her long lost cousin. Hoping to rebuild family ties, Ryn volunteers to help her cousin at the upcoming quilt retreat. But there is more than quilting on Ryn's mind. The irresistible Tuck MacBride is proving to be a dangerous distraction.

Ryn's past is riddled with bad boys like Tuck, who have left her alone and broken. She vows to stay away, but can't help taking a closer look when she realizes there is more to Tuck than meets the eye. Both of their pasts contain shattered promises, but Scotland is known to bring reluctant hearts together. Will the two of them be willing to cross the deep chasm between them and find love? If they do, they will only have Scotland to blame...

Praise for the Kilts and Quilts novels
"Griffin's lyrical and moving debut marks her as a most talented newcomer to the romance genre."

"A fun hop to scenic Scotland for the price of a paperback."

"With the backdrop of a beautiful town in Scotland, Griffin's story is charming and heartwarming. The characters are quirky and wonderful and easy to feel an instant attachment and affection for. Be forewarned: You're likely to shed happy tears."

"Patience Griffin gets love, loss, and laughter like no other writer of contemporary romance."

"Patience Griffin, through her writing, draws the reader into life in small town Scotland. Her use of language and descriptive setting had me feel like I was part of the cast."

"Griffin has a knack for creating characters that I find engaging from the opening page. I love the Kilts and Quilts series."

"Ms. Griffin paints a vivid picture of Gandiegow with the ever meddling members of the Kilts and Quilts. Fans of LuAnn McLane and Fiona Lowe will enjoy The Accidental Scot."