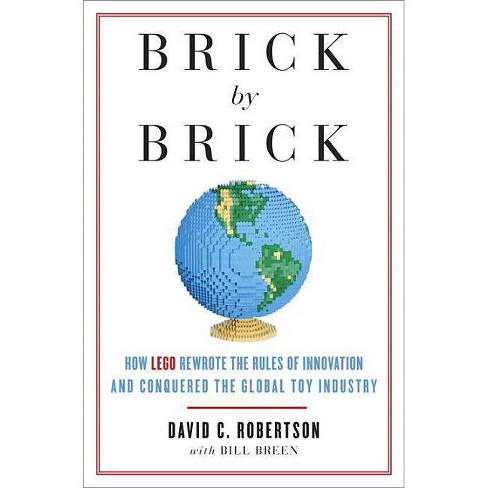 Sometimes radical yet always applicable, Brick by Brick abounds with real-world lessons for unleashing breakthrough innovation in your organization, using LEGO--which experienced one of the most remarkable business transformations in recent history--as a business model. As LEGO failed to keep pace with the revolutionary changes in kids' lives and began sliding into irrelevance, the company's leaders implemented some of the business world's most widely espoused prescriptions for boosting innovation. Ironically, these changes pushed the iconic toymaker to the brink of bankruptcy, showing that what works in theory can fail spectacularly in the brutally competitive global economy. It took a new LEGO management team--faced with the growing rage for electronic toys, few barriers to entry, and ultra-demanding consumers (ten-year old boys)--to reinvent the innovation rule book and transform LEGO into one of the world's most profitable, fastest-growing companies. Along the way, Brick by Brick reveals how LEGO: - Became truly customer-driven by co-creating with kids as well as its passionate adult fans
- Looked beyond products and learned to leverage a full-spectrum approach to innovation
- Opened its innovation process by using both the wisdom of crowds and the expertise of elite cliques
- Discovered uncontested, blue ocean markets, even as it thrived in brutally competitive red oceans
- Gave its world-class design teams enough space to create and direction to deliver built a culture where profitable innovation flourishes Whether you're a senior executive looking to make your company grow, an entrepreneur building a startup from scratch, or a fan who wants to instill some of that LEGO magic in your career, you'll learn how to build your own innovation advantage, brick by brick.

One of "The Best Books of 2013" -Fortune One of the "Best Business Books of 2013" -Strategy + Business Well told...Mr. Robertson, with the benefit of access to staff at Lego and partner companies, provides unusually detailed reporting of the processes that led to Lego's current hits. -Wall Street Journal

Robertson uncovers and shares a rare inside exploration of innovation-led transformation at its worst - and best. Any manager can learn from these lessons. -Forbes "An engaging, surprisingly suspenseful and intimate view of the inner workings, leadership dynamics and decision-making process." -Success

Good storytelling, with considerable insight into Lego's efforts at innovation, including both successes and failures. -Winnipeg Free Press "A valuable read for any business leader or student, but will also delight those familiar with the beloved toy." -Publishers Weekly starred review

A fascinating book. The story of how Lego came perilously close to disaster but then transformed itself into one of the most successful and innovative companies in the world serves both as an inspiration and an object lesson. -Chris Anderson, bestselling author of The Long Tail and Makers Brick by Brick is a fascinating study of an iconic toy company that figured out how to stay relevant in a rapidly changing market by returning to its core values and the guiding principles that made it a success in the first place. A must-read for any executive struggling with change. - Bryce G. Hoffman, journalist and author of American Icon: Alan Mulally and the Fight to Save Ford Motor Company

In an era filled with so many disheartening stories of corporate failure its refreshing to witness the turn-a-round success of one we have all grown up with during our childhood and that will continue for generations to come. -Adam Reed Tucker, LEGO Architectural Artist

"David Robertson and Bill Breen have done a wonderful job explaining brick by brick why Lego is loved around the world and what it took to keep this product at the center of toy industry for so long. Like Disney, Lego's success can be attributed to their drive for innovation, creativity and persistence. While the bricks are loved by children, Brick by Brick is for any business person wanting to understand what it takes to be great." -Lee Cockerell, executive vice president (retired and inspired), Walt Disney World Resort, author, Creating Magic and The Customer Rules

DAVID C. ROBERTSON is a Professor of Practice at the Wharton School of the University of Pennsylvania, where he teaches Innovation and Product Development. Prior to joining the faculty of the Wharton School, Robertson was the LEGO Professor of Innovation and Technology Management at IMD in Lausanne, Switzerland from 2002 through 2010. As the LEGO Professor, Robertson was given unique access to the company's management team, has written two case studies about the company, and is the co-author of a Harvard Business Review piece on LEGO. At IMD, Robertson was the co-director of the school's largest executive education program, the Program for Executive Development, and directed programs for Credit Suisse, EMC, HSBC, Skanska, BT, and other leading European companies. For more on Robertson's background, and to contact him for speaking and consulting engagements, visit www.robertsoninnovation.com.

BILL BREEN is a founding member of the team that launched Fast Company, which gained an avid following among businesspeople and won numerous awards, including the National Magazine Award for General Excellence. As senior editor, he edited Fast Company's special issues on design and leadership and wrote many articles on competition, innovation, and personal success. He is the coauthor of The Responsibility Revolution and The Future of Management, which the editors of Amazon.com selected as the best business book of the year. Breen speaks to business audiences on leadership, innovation and sustainability; he has appeared on CNN, Fox, CBS, National Public Radio, and other media outlets.
If the item details above aren’t accurate or complete, we want to know about it. Report incorrect product info.