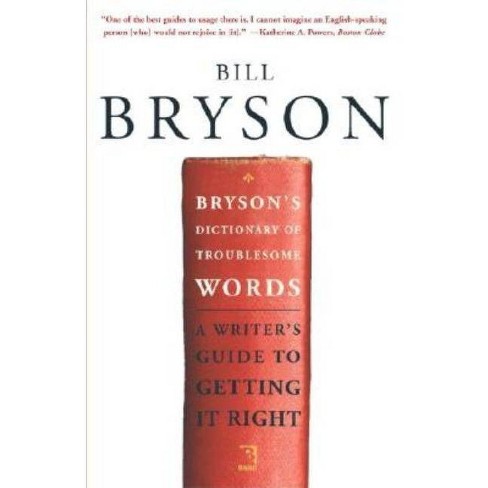 $10.99
MSRP$14.00
no reviews yet
be the first!be the first! ratings
Buy 2 get 1 free on video games, movies and books
Online only •
Shipping
Free standard shipping with RedCard
Loading, please wait...
Help us improve this page

One of the English language's most skilled and beloved writers guides us all toward precise, mistake-free usage.
As usual Bill Bryson says it best: "English is a dazzlingly idiosyncratic tongue, full of quirks and irregularities that often seem willfully at odds with logic and common sense. This is a language where 'cleave' can mean to cut in half or to hold two halves together; where the simple word 'set' has 126 different meanings as a verb, 58 as a noun, and 10 as a participial adjective; where if you can run fast you are moving swiftly, but if you are stuck fast you are not moving at all; [and] where 'colonel, ' 'freight, ' 'once, ' and 'ache' are strikingly at odds with their spellings." As a copy editor for the London" Times in the early 1980s, Bill Bryson felt keenly the lack of an easy-to-consult, authoritative guide to avoiding the traps and snares in English, and so he brashly suggested to a publisher that he should write one. Surprisingly, the proposition was accepted, and for "a sum of money carefully gauged not to cause embarrassment or feelings of overworth," he proceeded to write that book-his first, inaugurating his stellar career.
Now, a decade and a half later, revised, updated, and thoroughly (but not overly) Americanized, it has become "Bryson's Dictionary of Troublesome Words, more than ever an essential guide to the wonderfully disordered thing that is the English language. With some one thousand entries, from "a, an" to "zoom," that feature real-world examples of questionable usage from an international array of publications, and with a helpful glossary and guide to pronunciation, this precise, prescriptive, and-because it is written by Bill Bryson-oftenwitty book belongs on the desk of every person who cares enough about the language not to maul or misuse or distort it.