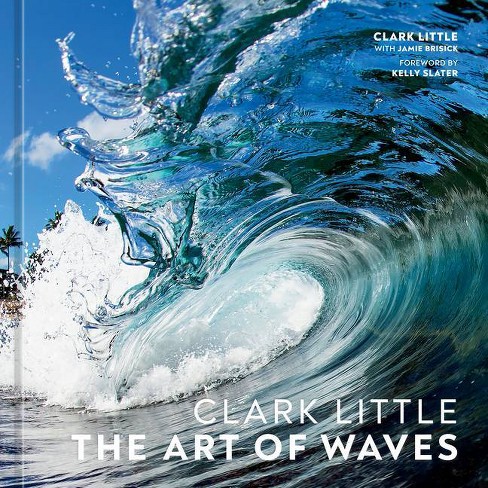 "Instagram sensation Clark Little shares his most remarkable photographs from inside the breaking wave, with a foreword by world surf champion Kelly Slater"--

Instagram sensation Clark Little shares his most remarkable photographs from inside the breaking wave, with a foreword by world surfing champion Kelly Slater. "One of the world's most amazing water photographers . . . Now we get to experience up-close these moments of bliss."--Jack Johnson, musician and environmentalist Surfer and photographer Clark Little creates deceptively peaceful pictures of waves by placing himself under the deadly lip as it is about to hit the sand. Clark's view is a rare and dangerous perspective of waves from the inside out. Thanks to his uncanny ability to get the perfect shot--and live to share it--Little has garnered a devout audience, been the subject of award-winning documentaries, and become one of the world's most recognizable wave photographers. Clark Little: The Art of Waves compiles over 150 of his images, including crystalline breaking waves, the diverse marine life of Hawaii, and mind-blowing aerial photography. This collection features his most beloved pictures, as well as work that has never been published in book form, with Little's stories and insights throughout. Journalist Jamie Brisick contributes essays on how Clark gets the shot, how waves are created, swimming with sharks, and more. With a foreword by eleven-time world surfing champion Kelly Slater and an afterword by the author on his photographic practice and technique, Clark Little: The Art of Waves offers a rare view of the wave for us to enjoy from the safety of land.

"Stunning images from inside the barrels of some of the most powerful and dangerous waves on Earth. . . . The Art of Waves chronicles [Clark's] adventures in the ocean."--Associated Press "The Art of Waves brings together [Clark Little's] most remarkable work to date . . . a unique glimpse into a world most of us only experience from the safety of the shoreline."--Outdoor Photography "In a stunning newly released coffee table book, surfer and award-winning photographer Clark Little shares a rare perspective of waves."--Western Art & Architecture "Clark Little is in love with the sea. The images in the book are from the dreams of every surfer on the planet."--Adventure Journal "Clark Little's love letter to shorebreak . . . The Art of Waves is a worthy coffee table addition to any surfer's collection."--Surfline "Check out Hawaii photographer Clark Little's new book. . . . features more than 150 transporting photos of waves and ocean life--from Hawai'i, Southern California, French Polynesia, Tonga, and the Galápagos."--Sierra Magazine "There's an undeniable allure to surfer and photographer Clark Little's aquatic photography, and it's one that teeters on the edge of dangerous attraction and childlike excitement."--HILuxury Magazine "This gorgeous hardcover book is a rare study of waves for the water lovers, surfers, nature seekers, art enthusiasts, and tropical island travelers around the world. . . . Little takes the reader through a dynamic vision quest of his deep, colorful, frozen-in-motion wave photography."--Standup Journal "Trust me, you want to check it out. This will be the pièce de résistance of your coffee table books." --The Weather Channel "Just buy it. Then for the rest of your days you can study each frame at your own leisure and marvel at this collection of some of the most dazzling displays to be found in the ocean."--Pacific Longboarder "Stunning ocean photography . . . The Art of Waves presents a dreamy kaleidoscope of more than 150 images shot from inside and above breaking waves."--Honolulu Magazine

"[Clark Little's] images in The Art of Waves are simply stunning and will appeal to surfers and landlubbers alike . . . this is a must-have for anyone who appreciates the beauty and majesty of the sea."--Salt Magazine "In Clark Little's spectacular shorebreak photography, he takes you directly inside a wave so you can witness firsthand its power and its beauty."--Digital Photo Pro "Shorebreak photography is Clark Little--and Clark Little is shorebreak photography."--Kelly Slater "I have been in the ocean my whole life, and to witness her beauty through Clark's eyes and images always impacts me."--Laird Hamilton "One of the world's most amazing water photographers."--Jack Johnson "Clark's exceptional skill is meeting the apex of [the wave's] energy and capturing it to share these final and most magnificent of manifestations."--Mike Stewart

Award-winning photographer Clark Little grew up on the North Shore of O'ahu, where he made his name as a pioneer of surfing at the lethal Waimea Bay shorebreak. His images of waves have been shared around the world, from the walls of the Smithsonian to the pages of National Geographic. Clark and his work have been featured in Nikon television commercials along with appearances on CBS Evening News with Norah O'Donnell, Good Morning America, Today, and the Discovery Channel. He lives on O'ahu and can be found at the beach under a detonating wave most days of the week. A lifelong connoisseur of waves and a former professional surfer, Jamie Brisick has authored books including Becoming Westerly: Surf Champion Peter Drouyn's Transformation into Westerly Windina, We Approach Our Martinis with Such High Expectations, and Have Board, Will Travel: The Definitive History of Surf, Skate, and Snow. He was awarded a Fulbright Fellowship and his writings have appeared in The New Yorker, The Surfer's Journal, and The New York Times. He lives in Los Angeles.
If the item details above aren’t accurate or complete, we want to know about it.

Wish I Was Here - by Sebastiaan Bedaux (Hardcover)

Time Is for E.V.E.R. - by Steven Clark Waiters

Grief in the Bottle - by Teressa Clark (Paperback)