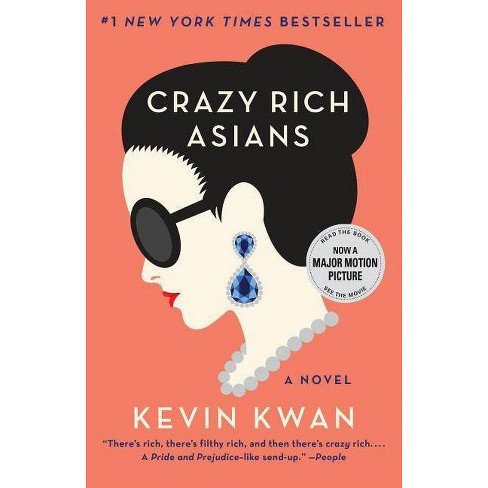 Envisioning a summer vacation in the humble Singapore home of a boy she hopes to marry, Chinese American Rachel Chu is unexpectedly introduced to a rich and scheming clan that strongly opposes their son's relationship with an American girl.

When New Yorker Rachel Chu agrees to spend the summer in Singapore with her boyfriend, Nicholas Young, she envisions a humble family home and quality time with the man she hopes to marry. But Nick has failed to give his girlfriend a few key details. One, that his childhood home looks like a palace; two, that he grew up riding in more private planes than cars; and three, that he just happens to be the country's most eligible bachelor. On Nick's arm, Rachel may as well have a target on her back the second she steps off the plane, and soon, her relaxed vacation turns into an obstacle course of old money, new money, nosy relatives, and scheming social climbers. Look for Kevin Kwan's latest novel, Sex & Vanity!

"A dizzily shopaholic comedy. . . . Wickedly delectable. . . . Offers refreshing nouveau voyeurism to readers who long ago burned out on American and English aspirational fantasies. . . . Hilarious."
--Janet Maslin, The New York Times "It's impossible not to get sucked into this satirical novel about the jet-setting lives of an enormous busybody family and its infinite Louboutin collection."
--Glamour "There's rich, there's filthy rich, and then there's crazy rich. . . . A Pride and Prejudice-like send-up."
--People "If this isn't the funniest book so far this year, it's up there. . . . Kwan, who grew up in Singapore, skewers his subjects deftly, stylishly, and completely--but with heart."
--The Denver Post "Deliciously decadent. . . . This 48-karat beach read is crazy fun. . . . [Read] Crazy Rich Asians, on an exotic beach in super-expensive sunglasses."
--Entertainment Weekly "An unputdownably funny, original, modern novel. . . . I actually couldn't put this book down to eat or to watch Downton Abbey."
--Plum Sykes, author of Bergdorf Blondes

"Rachel's squeaky-clean naiveté is a clever foil to the intricate workings of the high-glamour Asian set around her. Chinese on the outside but all-American on the inside, she allows us to see the myriad nuances of intra-Asian culture that the novel goes to great lengths to show."
--Tash Aw, NPR "Rollicking. . . . A lively, generous story of shallow extravagance and human devotion."
--The Boston Globe "Original and fun, Crazy Rich Asians is quite a roller coaster trip. I loved it!"
--Jackie Collins, author of The Power Trip

"Delightfully soapy. . . . [Crazy Rich Asians] eats its chiffon cake and has it too, simultaneously tut-tutting many of its characters for their vapid materialism while reveling in the milieu's sybaritic excess."
--The Wall Street Journal

"As spicily adventurous and lusciously satisfying as the renowned Singaporean street food Kevin Kwan's characters argue over; hot and sizzling, like the best satay, and dreamily transporting, like everyone's favorite dessert--goreng pisang. Feast on this outrageously funny and insightful novel of modern manners, and enjoy!"
--Lisa See, author of Dreams of Joy and Shanghai Girls

Kevin Kwan is the author of the international bestsellers Crazy Rich Asians, soon to be a major motion picture, and China Rich Girlfriend. Born in Singapore, he has called New York's West Village home since 1995. For the latest news and information, please visit: www.kevinkwanbooks.com
If the item details above aren’t accurate or complete, we want to know about it.

5 out of 5 stars
- 2 years ago, Verified purchaser
I thought the movie was great and wanted to read the book as soon as I found out there was a book I thoroughly enjoyed it, it was a fun read The shipping was also fast
2 guests found this review helpful. Did you?

So far so good

5 out of 5 stars
Jenfreshies - 4 years ago, Verified purchaser
Easy quick read. Love the chapters explaining family to character. The story makes me jealous I’m not Asian....oh and rich.
2 guests found this review helpful. Did you?

5 out of 5 stars
Would recommend
Nicole22 - 4 years ago, Verified purchaser
Phenomenally written and captivating. Highly recommend the book, haven’t seen the movie.
1 guest found this review helpful. Did you?

5 out of 5 stars
Would recommend
luvujenna - 4 years ago, Verified purchaser
Perfect summer read! I purchased this on a whim and am glad I did. Fun read about families with money and mean girls. I truly enjoyed this-will be reading the rest of the series.
2 guests found this review helpful. Did you?

5 out of 5 stars
Would recommend
Taylor - 4 years ago, Verified purchaser
LOVED this book! Finished it in 2 days and when I found out it was apart of a trilogy, I immediately purchased the sequels. Just finished the 2nd book now on to the last.
1 guest found this review helpful. Did you?