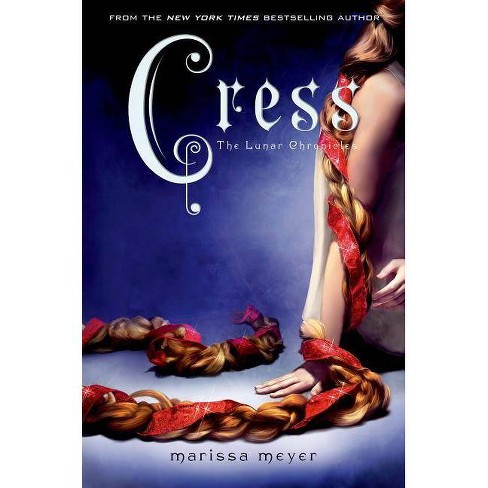 In this third book in Marissa Meyer's bestselling Lunar Chronicles series, Cinder and Captain Thorne are fugitives on the run, now with Scarlet and Wolf in tow. Together, they're plotting to overthrow Queen Levana and prevent her army from invading Earth. Their best hope lies with Cress, a girl trapped on a satellite since childhood who's only ever had her netscreens as company. All that screen time has made Cress an excellent hacker. Unfortunately, she's being forced to work for Queen Levana, and she's just received orders to track down Cinder and her handsome accomplice. When a daring rescue of Cress goes awry, the group is splintered. Cress finally has her freedom, but it comes at a higher price than she'd ever expected. Meanwhile, Queen Levana will let nothing prevent her marriage to Emperor Kai, especially the cyborg mechanic. Cress, Scarlet, and Cinder may not have signed up to save the world, but they may be the only hope the world has.

"As always, Meyer excels at interweaving new characters that extend beyond the archetypes of their fairy tale into the main story. Readers will eagerly await the final installment of this highly appealing and well-constructed series." --School Library Journal

"Meyer continues to show off her storytelling prowess, keeping readers engaged in a wide cast of characters while unfolding a layered plot that involves warring governments and a fast-spreading plague. The momentum Meyer built in the first two books continues to accelerate as the stakes grow higher for Cinder and her friends. The next installment cannot come fast enough." --Publishers Weekly, STARRED REVIEW "Once again, Meyer offers up a science fiction fantasy page-turner that salutes women's intelligence and empowerment . . . Old and new romances, unfinished story lines, and the prognostication of wartime horrors all pave the way for Meyer's much anticipated next installment, Winter, expected in 2015." --Booklist "This multilayered, action-packed page-turner is sure to please series fans." --The Horn Book

Marissa Meyer's first two books in the Lunar Chronicles, Cinder and Scarlet, debuted on the New York Times bestseller list. Marissa lives in Tacoma, Washington, with her husband and their three cats.