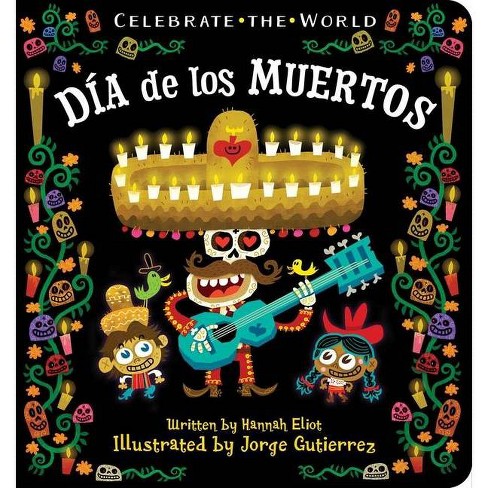 With vibrant illustrations by Golden Globe-nominated Mexican animator Gutierrez ("The Book of Life"), this festive board book in the Celebrate the World series teaches little ones about D'a de los Muertos, which honors ancestors and loved ones who have passed. Full color.

Learn all about the traditions of Día de los Muertos with this second book in the brand-new board book series Celebrate the World, which highlights special occasions and holidays across the globe. At the end of October each year, it's time to celebrate an ancient tradition: Día de los Muertos! With vibrant illustrations by Golden Globe-winning Mexican illustrator Jorge Gutierrez, this festive board book teaches that Día de los Muertos honors ancestors and loved ones who have passed. From sugar skulls to papel picado, this is a holiday that truly commemorates the cycle of life.

Hannah Eliot is a children's book editor who lives in Manhattan, New York. Her favorite activities include editing (of course), writing, painting, and doodling all over every piece of notebook paper she uses. Jorge R. Gutierrez is a Mexican animator, painter, writer, and director who, along with his wife, Sandra Equihua, created the multiple Annie and Emmy Award­-winning animated television series El Tigre: The Adventures of Manny Rivera for Nickelodeon. Born in Mexico City and raised in Tijuana, Gutierrez has completed various films, cartoons, illustrations, and paintings exploring his love affair with Mexican pop and folk culture. He won two Annie Awards (Best TV Animated show & Best TV Character Design) and one Emmy Award (Best TV Character Design) for El Tigre. He was also nominated for an Annie for Disney's The Buzz on Maggie. Most recently, he cowrote and directed the animated feature The Book of Life, which earned him a 2014 Golden Globe Award nomination for Best Animated Feature Film.
If the item details above aren’t accurate or complete, we want to know about it. Report incorrect product info.