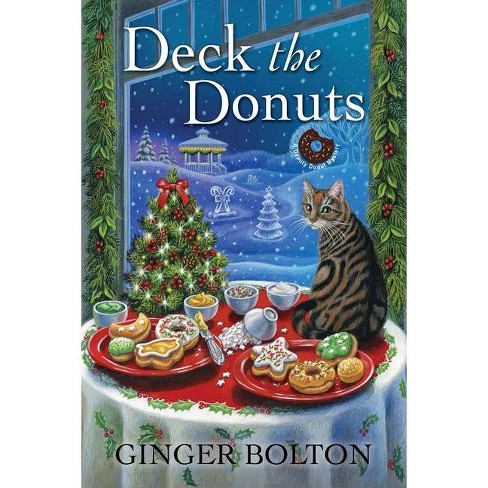 When an unexpected snowstorm strands a busload of passengers en route to an annual holiday festival, a local donut shop owner discovers the driver murdered and decides to investigate.

In the sixth criminally delicious Deputy Donut Mystery series by Ginger Bolton, 'tis the season for the delectable desserts Emily Westhill and her cuddly cat serve up at their donut shop--but someone naughty on Santa's list has come to town...
It's Christmastime again in Fallingbrook, Wisconsin. Emily has truly decked the halls of her donut shop and decorated her donuts with festive designs from green and red frosting to snowflake sprinkles. For the annual Ice and Lights Festival, she's commissioned a sculpture with three ice-carved donut shapes to form a holey snowman, Frosty the Donut. She has one Christmas wish this year--to spend some time under the mistletoe with a certain detective. But the holidays just aren't the same without an unexpected disaster or two. A tour bus on its way to the festival has crashed and a snowstorm has left all the shaken passengers stranded and shivering. Emily and her friends open their homes to shelter the traveling families, while the bus driver is admitted to the hospital for his injuries. But the following morning, Emily discovers his body--buried beneath Frosty the Donut. The bus passengers show little sympathy for the man who dashed through the snow so badly, some claiming he was under the influence while behind the wheel. Emily also discovers that the driver had a history with folks in Fallingbrook. With multiple motives for murder piling up, it will take a Christmas miracle for Emily to solve this crime...

Ginger Bolton is the pseudonym of an Agatha-nominated cozy mystery author. She is the author of the Deputy Donut Mystery series and is very fond of donuts, coffee, and coffee shops that encourage patrons to linger and chat. Ginger lives in a rural area surrounded by cozy villages. When she isn't reading, writing, or daydreaming while gazing out windows, she walks her dogs, plays an electric piano (she uses earphones so as not to frighten the wildlife), creates minor disasters in her kitchen, and occasionally takes part in local amateur theater productions, which, intended or not, become comedies. Visit her online at GingerBolton.com.
If the item details above aren’t accurate or complete, we want to know about it.