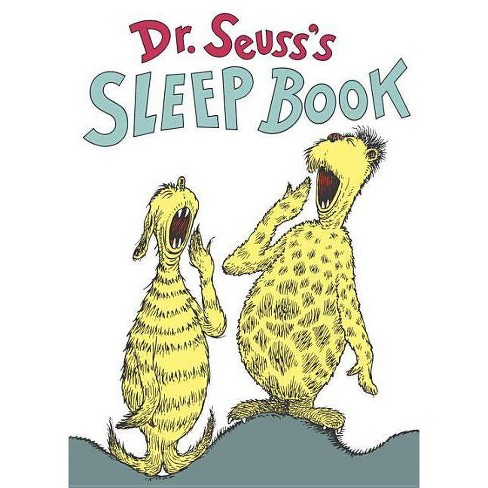 Catch a case of the yawns with Dr. Seuss in this classic rhyming picture book. Bedtime has never been more fun!

A yawn is quite catching, you see. Like a cough.
It just takes one yawn to start other yawns off. Dr. Seuss spins a sleep-tastic tale about a very small bug and a very big yawn that spreads and spreads. Meanwhile, the Audio-Telly-o-Tally-o Count adds up every sleeping creature from the country of Keck to the Castle of Krupp. First one, then seven, all the way to the billions and zillions, the Who's-Asleep-Count just keeps growing and growing! This book is a perfect bedtime story that will have the most reluctant readers laughing, and the most reluctant sleepers snoring! Ninety-nine zillion, nine trillion and two
Creatures are sleeping!
So...How about you?

THEODOR SEUSS GEISEL--aka Dr. Seuss--is one of the most beloved children's book authors of all time. From The Cat in the Hat to Oh, the Places You'll Go!, his iconic characters, stories, and art style have been a lasting influence on generations of children and adults. The books he wrote and illustrated under the name Dr. Seuss (and others that he wrote but did not illustrate, including some under the pseudonyms Theo. LeSieg and Rosetta Stone) have been translated into thirty languages. Hundreds of millions of copies have found their way into homes and hearts around the world. Dr. Seuss's long list of awards includes Caldecott Honors for McElligot's Pool, If I Ran the Zoo, and Bartholomew and the Oobleck, the Pulitzer Prize, and eight honorary doctorates. Works based on his original stories have won three Oscars, three Emmys, three Grammys, and a Peabody.
If the item details above aren’t accurate or complete, we want to know about it.

The Very Hungry Caterpillar - by Eric Carle (Board Book)

On the Night You Were Born - by Nancy Tillman

The Sneetches and Other Stories (Hardcover) by Dr. Seuss

Horton Hears a Who! (Reissue) (Hardcover) - by Dr. Seuss

If I Ran the Circus (Hardcover) by Dr. Seuss

Cat In The Hat - by DR SEUSS (Hardcover)

Horton Hears a Who! (Reissue) (Hardcover) - by Dr. Seuss

5 out of 5 stars
Little Tornado - 1 year ago
Dr. Seuss at his finest.
Did you find this review helpful?

5 out of 5 stars
Kathy - 2 years ago, Verified purchaser
My mom read this to us and other Dr. Seuss books all the time! Beautiful memories!
Did you find this review helpful?

5 out of 5 stars
Would recommend
- 2 years ago
Guaranteed to put you and your child to sleep.
Did you find this review helpful?

Disappointed not as described

1 out of 5 stars
Would not recommend
Special Aide 3 - 4 years ago, Verified purchaser
Loved the story. However, this book itself was a disappointment. So where do I start....First off what came was NOT a full-foil covered Anniversary Edition There was NO foil on it at all nor was it an anniversary edition as described. SO it you are buying based on that. DO NOT waste your money. I bought 2 for gifts. What I received was a joke. The binding was off track. Both books came with a lot of imperfections and looked warped, pages looked as though the books had been left in a moist place. May return and buy elsewhere. Too embarrassed to even give these as a gift. So the one star is for the quality not the story. This is a good Dr. Seuss story. Just poor quality book. Would expect better from Target.
3 guests found this review helpful. Did you?

2 out of 5 stars
Would not recommend
Ashleyp - 6 years ago
Book spin was printed half off the spin. My little boy didn't mind, but I would expect the book to be printed correctly.
Did you find this review helpful?

5 out of 5 stars
Would recommend
Elisabeth - 7 years ago
This is a great bedtime book. My son loves it.
Did you find this review helpful?