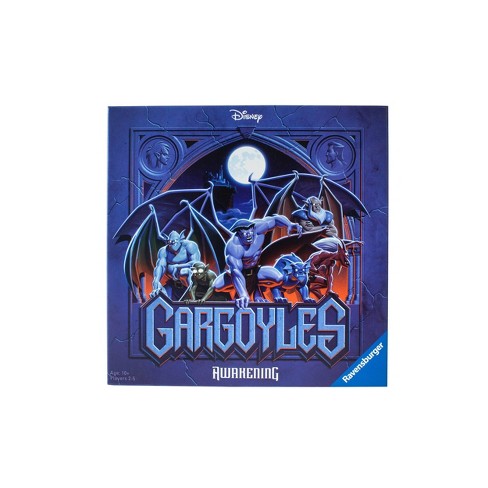 One thousand years ago, superstition and the sword ruled. It was a time of darkness. It was a world of fear. It was the age of Gargoyles.

Stone by day, warriors by night, we were betrayed by the humans we had sworn to protect, frozen in stone by a magic spell for a thousand years. Now here in Manhattan, the spell is broken, and we live again!

We are defenders of the night. We are Gargoyles!

In this cooperative strategy game, players work together as Goliath, Brooklyn, Broadway, Hudson, Lexington, and NYPD detective Elisa Maza to defend Manhattan. Use your character’s unique abilities to defeat Xanatos and Demona in one of four episodes:

Reawakening: Face off against Xanatos and Demona and save Coldstone’s mind.

Temptation and Magic: Take back the Grimorum Arcanorum from Demona and save those she’s enslaved.

Battle with the Steel Clan: In this one vs. many scenario, one player takes the role of Xanatos and the Steel Clan and tries to either defeat a hero or destroy the police tower. The other players win as the Gargoyles if they defeat Xanatos.

In this cooperative strategy game, players face off against Xanatos and Demona to defend Manhattan in one of four “episodes.” Each player turn has three phases performed in the following order: Hero, Villain, and Refresh.
During the Hero phase, players can move, glide, attack, or play a Hero card from their hand. During the Villain phase, Xanatos, Demona, and their minions attack! Finally, players draw cards in the Refresh phase.
During Daytime, players and Villains heal and recuperate before the next battle!

Ravensburger ALIEN: Fate of the Nostromo Board Game

Ravensburger ALIEN: Fate of the Nostromo Board Game

The Wizard of Oz Adventure Family Board Game

Great for fans, hopeful for expansions

4 out of 5 stars
Would recommend
- 1 year ago, Verified purchaser
Positives: Gargoyles fans will love this game for the miniatures and the stories told in the scenarios. The minis are about the right size (maybe a little small) to be used with RPGs, which is great. The gameplay is also pretty smooth once you read through all the rules and figure out the height issues. Negatives: No Bronx. All the villains including Xanatos and Demona are only cardboard. The buildings don’t fit into the box after they are assembled and be careful punching them out - several ripped for me at the connectors even when being careful. Lastly, there are only 4 “episodes,” which means after playing four roughly 1-2 hour sessions you’re out of new material. Conclusion: I have high hopes for this game, and I think a small expansion or two could easily give everyone what they want and provide more gameplay material. I wouldn’t buy this unless you are a fan of Gargoyles, but as a fan, they tried here to created a quality experience and largely succeeded.
2.0
length of play
out of 5
length of play: 2 out of 5
4.0
quality
out of 5
quality: 4 out of 5
3.0
broad age appeal
out of 5
broad age appeal: 3 out of 5
4.0
value
out of 5
value: 4 out of 5
7 guests found this review helpful. Did you?

5 out of 5 stars
Would recommend
LeoVA - 1 year ago, Verified purchaser
Love the quality and attention to detail for what is quite an esoteric, yet refreshing, venture. As a Gargoyles fan, I just had to purchase this after seeing it randomly and surprisingly displayed among other games. Full disclosure, this review is given purely on the aesthetic and general quality of the game and its pieces; I have yet to delve into the actual gameplay and game mechanics. First, the artwork, although slightly different than that within the series (but then again there were multiple animation studios involved to begin with) is detailed and true to the characters and style of the series. There are several visual/design details that have been taken into consideration, from the initial presentation of the game box to its packaging to the Gargoyles’ (and Elisa’s) side profiles, complete with color coordination and eyes ablaze, on the back of the game cards, for example. The dice possess a medium weight to them and are of good quality; the claw pattern has been embossed into the dice although the lightning pattern seems to be a only a decal which may rub off over time. It may be premature of me to give a 5 star review having not yet played the actual game, but as a long time fan of *cough cough* over 20 years, simply seeing a quality Gargoyles product out nowadays makes my heart extremely happy. I might revisit/update this review once I learn and experience the actual gameplay but as it stands, I think any true Gargoyles fan should own this.
5.0
quality
out of 5
quality: 5 out of 5
4.0
broad age appeal
out of 5
broad age appeal: 4 out of 5
5.0
value
out of 5
value: 5 out of 5
5.0
length of play
out of 5
length of play: 5 out of 5
8 guests found this review helpful. Did you?

4 out of 5 stars
Bigman10 - 1 year ago, Verified purchaser
I gotta say this board game hits almost all the nostalgia points for a gargoyles fan. I love the show and have both seasons on dvd. The components are great. only problem i have is that bronx is not a playable character but is featured on artwork for cards. he was my 3rd favorite character. They also give you miniatures for the other characters but demona and xanatos are cardboard standees. wish they would have been made into miniatures as well or at least make every character cardboard standees instead. Id say this is a must own for gargoyle fans though.
5.0
value
out of 5
value: 5 out of 5
5.0
quality
out of 5
quality: 5 out of 5
9 guests found this review helpful. Did you?

5 out of 5 stars
Would recommend
no name - 1 year ago, Verified purchaser
Artwork is amazing. Gameplay if very fun and straightforward.
3 guests found this review helpful. Did you?

5 out of 5 stars
Would recommend
Jonathan - 1 year ago
Disney Gargoyles: Awakening is a unique co-operative (and competitive) game featuring card and action-point based combat mechanics and fun thematic missions with changing rule sets. It honors the source material so well by having extremely thematic card actions, missions, and character abilities. The gameplay is simple enough for the whole family (if you’ve played Horrified, it’s a bit simpler than that!) and has lots of fun replayability with 6 playable characters and 4 missions, one of which is competitive (1vAll). We’re very happy with this game! Only downside so far is that the awesome pop-up buildings don’t fit in the box fully constructed, you have to deconstruct Xanatos’ tower and the bottom floor of the police station. Everything else can remain intact though! Highly recommend this if you loved the TV show.
5.0
broad age appeal
out of 5
broad age appeal: 5 out of 5
5.0
length of play
out of 5
length of play: 5 out of 5
5.0
quality
out of 5
quality: 5 out of 5
5.0
value
out of 5
value: 5 out of 5
15 guests found this review helpful. Did you?