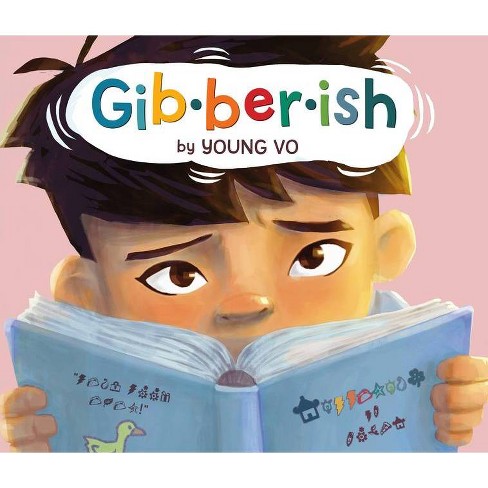 When Dat starts school in a country where he does not speak the language, everything around him sound like gibberish until a new friend helps him make sense of his new world.

It's Dat's first day of school in a new country! Dat and his Mah made a long journey to get here, and Dat doesn't know the language. To Dat, everything everybody says - from the school bus driver to his new classmates - sounds like gibberish. How is Dat going to make new friends if they can't understand each other? Luckily there's a friendly girl in Dat's class who knows that there are other ways to communicate, besides just talking. Could she help make sense of the gibberish?

"...splendid...a powerful story about compassion and finding one's voice. There are an increasing number of picture books about immigration, but this one stands above the rest in its brilliant and deeply felt depiction of how it feels for children just like Dat." - Julie Danielson, Seven Impossible Things Before Breakfast

"The ingenuity and playfulness of the art, as well as the book's overarching message, make this title a must for any child's library." - Shelf Awareness

"Vo's heartwarming immigration story is -beautifully told, with multimedia illustrations that shine on each spread. This -uplifting -story is a welcome addition to any collection."-School Library Journal,


[STAR] "This picture book brilliantly conveys how terrifying and confusing it can be to adapt to a strange country and how much even one person's acts of kindness can help. This is a story that will give hope to kids dealing with a new country and could inspire others to reach out to struggling immigrant children." - Booklist (starred),

Young Vo learned to draw before he could write. He drew a lot of characters, then began to write stories for them. There were not many job choices that he could make, so he decided to be an animator, illustrator, and author. Now he writes and draws his stories before the sun rises, then during the day, he animates.
If the item details above aren’t accurate or complete, we want to know about it.

Endlessly Ever After - by Laurel Snyder (Hardcover)

The Blur - by Minh Lê (Hardcover)

The Veil Between Two Worlds - by Christina Vo (Paperback)