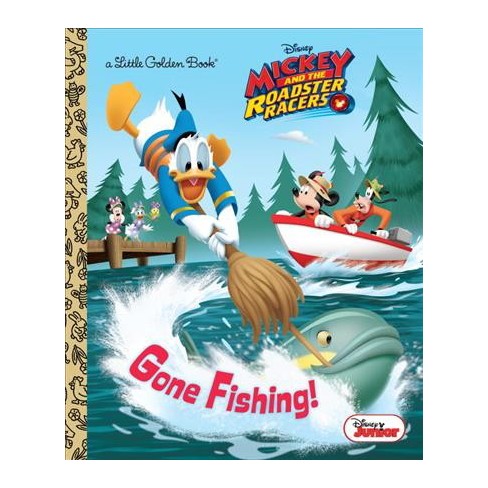 When Donald, Minnie, and Daisy suprise Mickey and Goofy on their fishing trip, the relaxing weekend they had planned turns to chaos.

This Little Golden Book is based on the Disney Junior show Mickey and the Roadster Racers! Mickey Mouse and Goofy are looking forward to a nice, quiet fishing trip. When Donald Duck, Minnie, and Daisy decide to join them, crazy things happen! Children ages 2 to 5 will love this Little Golden Book, which retells a super-funny episode of the Disney Junior show Mickey's Roadster Racers.
In Mickey and the Roadster Racers, more story takes place off the road than on! As each of the gang's wacky adventures pops up, Mickey must use his wits and ingenuity to save the day.

Sherri Stoner is a mermaid. Really! Body model for Disney's The Little Mermaid as well as the voice of Slappy Squirrel for Steven Spielberg's Animaniacs. She co-wrote the films Casper and My Favorite Martian. This three-time Emmy and Peabody Award-winning writer/producer of animation is part toon and has been flattened by an anvil too many times to count.
If the item details above aren’t accurate or complete, we want to know about it. Report incorrect product info.