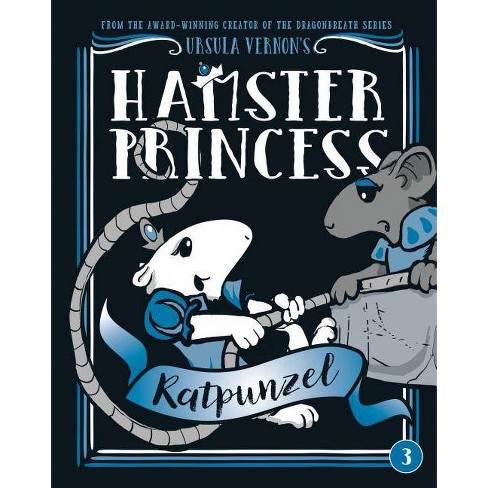 $10.59
MSRP$13.99
no reviews yet
be the first!be the first! ratings
Shipping
Free standard shipping with RedCard
Loading, please wait...
Help us improve this page

Praise for Hamster Princess: Ratpunzel "Packed with wit that's broad enough to appeal to children yet clever enough to win over adults...Hand this can't-miss installment to followers of the series, fans of comedy mixed with adventure, and those seeking an alternative to traditional princess stories." --School Library Journal "Harriet is as delightful as ever.... As long as Vernon keeps Harriet's adventures coming, fans new and old are boundto keep reading them." -- Booklist "Vernon pokes gentle fun at all of her characters--especially lovable Harriet--and offers a humorous feminist critique of the princess genre." --Kirkus Reviews Praise for Hamster Princess: Harriet the Invincible: A Publishers Weekly Best of 2015 Book
A 2015 Texas Bluebonnet nominee * "A joy to read, and we can only hope that Harriet - long may she reign - will return in later installments." --Booklist, starred review * "Move over, Babymouse, there's a new rodent in town!...Vernon has created a spunky heroine readers will cheer for and who will leave them eagerly searching for the happily ever after in the next installment." --School Library Journal, starred review * "Harriet is her own hamster, but she takes her place proudly alongside both Danny Dragonbreath and Babymouse. Creatively fresh and feminist, with laughs on every single page." --Kirkus Reviews, starred review * "A book with all the makings of a hit. Readers will be laughing themselves silly." --Publishers Weekly, starred review
If the item details above aren’t accurate or complete, we want to know about it. Report incorrect product info.