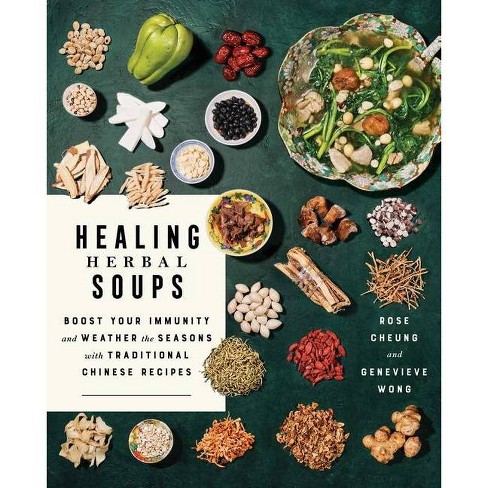 Soothe your soul and boost your immunity with these easy and delicious soup recipes that incorporate Traditional Chinese Medicine. Combining the trends of culinary medicine and seasonal eating and adding a dash of Traditional Chinese Medicine (TCM), Healing Herbal Soups is the first book of its kind to focus on boosting immunity and weathering the seasons, by a mother-daughter, Chinese-American duo. Rose and Genevieve have been making Chinese herbal soups in their kitchens all their lives. They made broths to help their bodies adapt to the seasons, and now, for the first time, they're translating these traditional recipes--all of which have been vetted by Dr. Shiu Hon Chui, a preeminent TCM doctor, researcher, and professor--into English. Healing Herbal Soups provides a complete herbal encyclopedia and more than fifty tasty recipes--with full-color photographs--that mix herbs with meat and vegetables to create healing broths. These easy-to-follow recipes are here for you whenever you feel unwell, or if you're just looking to add healthy soups to your weekly meal rotation. Armed with an introduction to TCM and special sections on tea, ginger, and ginseng, as well, at last, you can feel less dependent on Western concoctions of drugs and chemicals, and start using traditional Chinese herbs right in the comfort of your own home.

Rose Cheung is a mother and entrepreneur. She inherited her fondness for soup from her mother who raised her in a very traditional Chinese family in Hong Kong. After Rose moved to the United States to attend college, she got married and decided to settle down in Southern California. She and her husband briefly opened and owned a Chinese restaurant in Hermosa Beach for four years. Rose's passion for Chinese medicine, food, and herbs has grown so much that in 2009 she sponsored the development of an herbal formula used to treat diabetes at the Macau University of Science and Technology. The product was subsequently patented and is currently available through select Traditional Chinese Medicine clinics in Asia. Genevieve Wong is a four-time Emmy-nominated producer and writer. As a journalist, she has reported for news organizations like NBC News, the New York Post, and the Los Angeles Times. Genevieve is also a former cooking producer at The Nate Show, where she worked alongside celebrity chefs like Todd English and Bobby Flay. After two decades of suffering from conditions like eczema, allergies, and asthma, Genevieve became extremely interested in TCM at the age of twenty-three, and by default, began to learn about the healing powers of Chinese herbal soups. Although she does not consider herself to be a domestic person, it is not unusual to see Genevieve in the kitchen, fanning the flames of her herbal concoctions or boiling herbal soups and porridge for her friends and family who are sick or pregnant.
If the item details above aren’t accurate or complete, we want to know about it.

Tell Me a Story - by Louise DeForest (Paperback)

Tell Me Another Story - by Louise DeForest (Paperback)

The Call of the Wild and Free - by Ainsley Arment

The Art of Herbal Healing - by Susan Clearwater (Paperback)