Here for It - by R Eric Thomas 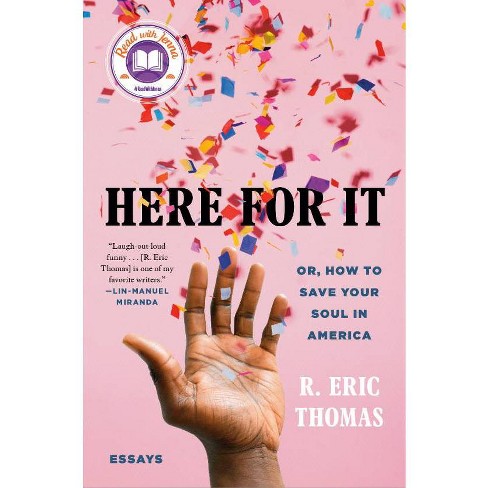 "R. Eric Thomas didn't know he was different until the world told him so. Everywhere he went--whether it was his rich, mostly white, suburban high school, his conservative black church, or his Ivy League college in a big city--he found himself on the outside looking in. In essays by turns hysterical and heartfelt, Eric redefines what it means to be an 'other' through the lens of his own life experience"--Publisher marketing.

NATIONAL BESTSELLER - Read with Jenna Book Club Pick as Featured on Today - From the creator of Elle's "Eric Reads the News," a heartfelt and hilarious memoir-in-essays about growing up seeing the world differently, finding unexpected hope, and experiencing every awkward, extraordinary stumble along the way. "Pop culture-obsessed, Sedaris-level laugh-out-loud funny . . . [R. Eric Thomas] is one of my favorite writers."--Lin-Manuel Miranda, Entertainment Weekly FINALIST FOR THE LAMBDA LITERARY AWARD - NAMED ONE OF THE TEN BEST BOOKS OF THE YEAR BY TEEN VOGUE AND ONE OF THE BEST BOOKS OF THE YEAR BY O: The Oprah Magazine - NPR - Marie Claire - Men's Health R. Eric Thomas didn't know he was different until the world told him so. Everywhere he went--whether it was his rich, mostly white, suburban high school, his conservative black church, or his Ivy League college in a big city--he found himself on the outside looking in. In essays by turns hysterical and heartfelt, Thomas reexamines what it means to be an "other" through the lens of his own life experience. He explores the two worlds of his childhood: the barren urban landscape where his parents' house was an anomalous bright spot, and the Eden-like school they sent him to in white suburbia. He writes about struggling to reconcile his Christian identity with his sexuality, the exhaustion of code-switching in college, accidentally getting famous on the internet (for the wrong reason), and the surreal experience of covering the 2016 election for Elle online, and the seismic changes that came thereafter. Ultimately, Thomas seeks the answer to these ever more relevant questions: Is the future worth it? Why do we bother when everything seems to be getting worse? As the world continues to shift in unpredictable ways, Thomas finds the answers to these questions by reenvisioning what "normal" means and in the powerful alchemy that occurs when you at last place yourself at the center of your own story. Here for It will resonate deeply and joyfully with everyone who has ever felt pushed to the margins, struggled with self-acceptance, or wished to shine more brightly in a dark world. Stay here for it--the future may surprise you.

"If you're yearning for that laugh-out-loud on the subway, 'damn-I-left-my-book-at-home' kind of read, look no further than R. Eric Thomas's Here for It."--InStyle "A quirky, funny, and deep meditation on being black and queer in America."--Interview "This book was a lovely gift of hope and hysterical wit that kept me warm during the apocalypse. I laughed. I cried. I wish I would have written it myself."--Jenny Lawson, New York Times bestselling author of You Are Here and Furiously Happy "Here for It is Thomas at his finest: funny, clever, thoughtful, and compelling. I'm glad the world will not only get to experience more of Thomas's talent, but another much-needed story from another gay Black man in America."--Michael Arceneaux, New York Times bestselling author of I Can't Date Jesus: Love, Sex, Family, Race, and Other Reasons I've Put My Faith in Beyoncé "A laugh-out-loud memoir that is strongly recommended for everyone."--Library Journal (starred review)

"With humor, candor, and some self-deprecation, Thomas, a playwright and Elle columnist, delivers a debut essay collection that explores his search for self, love, and stable employment. . . . Whether dealing with love, breakups, or other setbacks, Thomas is an affable narrator with a penchant for pop culture, funny quips, and charming humility."--Publishers Weekly

"Every book says on the jacket that it is a 'razor-sharp tour de force, ' but this one actually is a razor-sharp tour de force, with an enormous heart to boot. Please give yourself the gift of reading this book."--Alexandra Petri, Washington Post columnist "Here For It is a blockbuster and R. Eric Thomas is a visionary. This collection moved me from laughter to tears and back to laughter again in the span of a single page."--Kristen Arnett, New York Times bestselling author of Mostly Dead Things "By turns laugh-out-loud funny and deeply moving, intensely personal and impeccably of-the-moment, Here for It is exactly what we need in 2020. No one writes quite like R. Eric Thomas, and his memoir proves it."--David Litt, New York Times bestselling author of Thanks, Obama: My Hopey, Changey White House Years "Hilarious, revelatory, hopeful, incisive--Here for It feels like splitting dessert with your funniest friend, if that friend was also your smartest professor and a devastatingly sharp pop culture historian."--Casey McQuiston, New York Times bestselling author of Red, White & Royal Blue "If I were stocking a time capsule to show future generations how it felt to be alive at this exact moment in American culture, this is the book I'd toss in first. Readers of all stripes will relate to Thomas's hilarious, touching observations on love, success, and identity."--Mary Laura Philpott, author of I Miss You When I Blink

R. Eric Thomas is a bestselling author, playwright, and screenwriter. His books include Here for It: Or, How to Save Your Soul in America, which was featured as a Read with Jenna Book Club Pick on NBC's Today, and Reclaiming Her Time: The Power of Maxine Waters, co-authored with Helena Andrews-Dyer. For four years, he wrote "Eric Reads the News," a wildly popular daily humor column covering pop culture and politics for Elle online. Eric is the winner of the Barrymore Award for Best New Play and the Dramatist Guild Lanford Wilson Award, and was a finalist for the Steinberg/ATCA New Play Award. He has written for the Peabody Award-winning streaming series Dickinson and Better Things on FX. Off the page, Eric is also the long-running host of The Moth StorySlams in Philadelphia and Washington, D.C., and has been heard multiple times on The Moth Radio Hour, NPR's All Things Considered, and It's Been A Minute with Sam Sanders. He lives in Maryland with his extraordinary husband, the Reverend David Norse Thomas.
If the item details above aren’t accurate or complete, we want to know about it. Report incorrect product info.