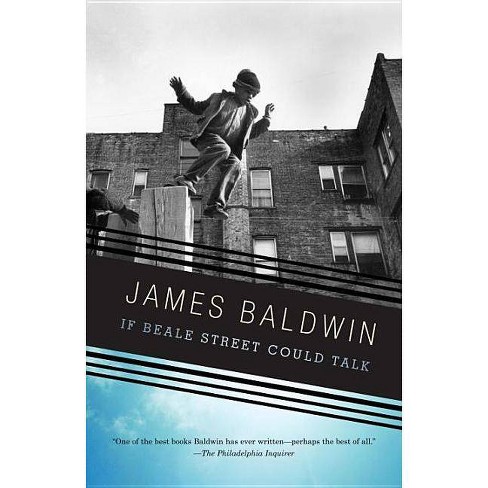 $9.99
MSRP$14.95
undefined out of 5 stars with 0 reviews
be the first!be the first! ratings
Help us improve this page

In this honest and stunning novel, Baldwin has given America a moving story of love in the face of injustice. In a love story that evokes the blues, where passion and sadness are inevitably intertwined, Baldwin creates two characters so alive and profoundly realized that they are unforgettably ingrained in the American psyche.

In this honest and stunning novel that inspired the award-winning major motion picture of the same name, James Baldwin has given America a moving story of love in the face of injustice.

A major work of Black American fiction. -The New Republic Told through the eyes of Tish, a nineteen-year-old girl, in love with Fonny, a young sculptor who is the father of her child, Baldwin's story mixes the sweet and the sad. Tish and Fonny have pledged to get married, but Fonny is falsely accused of a terrible crime and imprisoned. Their families set out to clear his name, and as they face an uncertain future, the young lovers experience a kaleidoscope of emotions-affection, despair, and hope. In a love story that evokes the blues, where passion and sadness are inevitably intertwined, Baldwin has created two characters so alive and profoundly realized that they are unforgettably ingrained in the American psyche.

One of the best books Baldwin has ever written-perhaps the best of all. -The Philadelphia Inquirer

A moving, painful story, so vividly human and so obviously based on reality that it strikes us as timeless."-Joyce Carol Oates

f Van Gogh was our nineteenth-century artist-saint, James Baldwin is our twentiethth-century one. -Michael Ondaatje

Striking and particularly haunting. . . . A beauty, especially in its rendering of youthful passion. -Cosmopolitan

A major work of Black American fiction... His best novel yet, even Baldwin's most devoted readers are due to be stunned by it. -The New Republic

Emotional dynamite... a powerful assault upon the cynicism that seems today to drain our determination to confront deep social problems. -Library Journal

A moving, painful story, so vividly human and so obviously based on reality that it strikes us as timeless. -The New York Times Book Review

James Baldwin was born in 1924 and educated in New York. He is the author of more than twenty works of fiction and nonfiction, including Go Tell It on the Mountain; Notes of a Native Son; Giovanni's Room; Nobody Knows My Name; Another Country; The Fire Next Time; Nothing Personal; Blues for Mister Charlie; Going to Meet the Man; The Amen Corner; Tell Me How Long the Train's Been Gone; One Day When I Was Lost; If Beale Street Could Talk; The Devil Finds Work; Little Man, Little Man; Just Above My Head; The Evidence of Things Not Seen; Jimmy's Blues; and The Price of the Ticket. Among the awards he has received are a Eugene F. Saxon Memorial Trust Award, a Rosenwald Fellowship, a Guggenheim Fellowship, a Partisan Review Fellowship, and a Ford Foundation grant. He was made a Commander of the Legion of Honor in 1986. He died in 1987.
If the item details above aren’t accurate or complete, we want to know about it. Report incorrect product info.