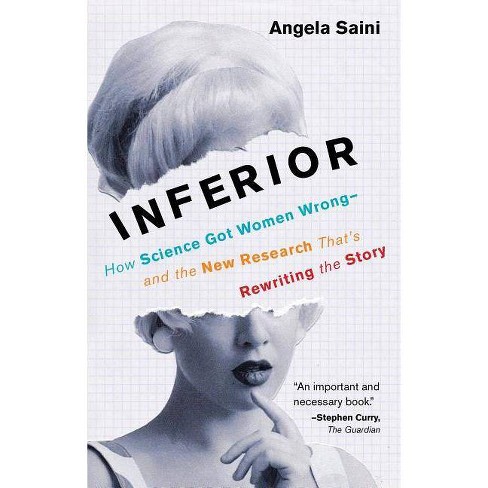 $13.89
MSRP$16.00
0 out of 5 stars with 0 reviews
be the first!be the first! ratings
Shipping
Free standard shipping with RedCard
Help us improve this page

"A brilliant approach to a long overlooked topic, Inferior is impossible to ignore and invaluable."
--Booklist "The Enlightenment brought revolutions in science, philosophy and art while ushering in respect for human reason over religious faith. But the era also created a narrative about women--that they are intellectually inferior to men. Indeed, science itself is an establishment rooted in exclusion, writes science journalist Saini, citing a long history of unrecognized achievement by women scientists: Lise Meitner, Rosalind Franklin and Emmy Noether, to name a few. The process of science is also riddled with inherent biases that have done nothing to improve society's views of women. Neurosexism, for example, is a term that describes scientific studies that fall back on gender stereotypes. New science and awareness are overturning a great deal of flawed thinking, as Saini shows, but there is still a long way to go."
--Andrea Gawrylewski, Scientific American "In this smart, balanced, and wonderfully readable book, Angela Saini breaks the vicious cycle by which women, having been excluded from the sciences by men who assumed them to be inferior, were judged by those same male scientists to be inferior. Study by study, she objectively reexamines what we think we know about the supposed differences between the sexes. If you have ever been shouted down by a male colleague who insists that science has proven women to be biologically inferior to men, here are the arguments you need to demonstrate that he doesn't know what he is talking about."
--Eileen Pollack, author of The Only Woman in the Room "Angela Saini's Inferior proves the opposite of its title. It is a lively, well-written, informed account of women's proven powers. She shows that science, long used as a weapon against women, is today an ally in their steady advance. Inferior is another nail in the coffin of male supremacy."
--Melvin Konner, author of Women After All "This is an important book that I hope will be widely read. Any time biases are identified and corrected for, it is science and policymaking rather than feminism or any particular ideology that comes out ahead."
--Sarah Blaffer Hrdy, author of The Woman That Never Evolved, Mother Nature, and Mothers and Others
If the item details above aren’t accurate or complete, we want to know about it. Report incorrect product info.