Is Your Mama a Llama? - (Scholastic Bookshelf) by Deborah Guarino (Paperback) 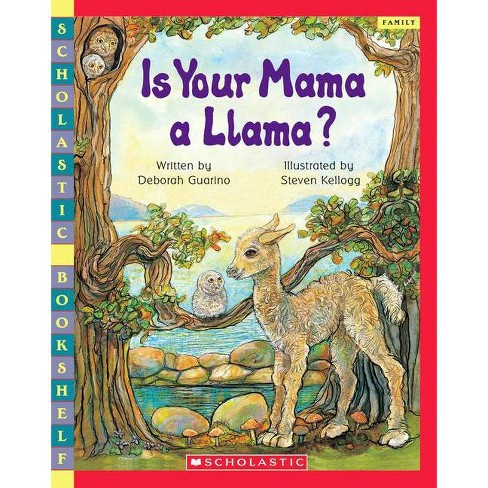 In this favorite, whimsical, rhyming riddles help Lloyd the baby llama guess what kind of animal everyone's mama really is. But it's his friend Lyn the llama that finally leads Lloyd to the answer he most longs to hear. Full color.

Let Scholastic Bookshelf be your guide through the whole range of your child's experiences-laugh with them, learn with them, read with them! Eight classic, best-selling titles are available now!

She grazes on grass, and she likes to say, 'Moo!' I don't think that is what a llama would do.

In this favorite, whimsical rhyming story, riddles help Lloyd the baby llama guess what kind of animal everyone's mama really is. But it's his friend Lyn the llama that finally leads Lloyd to the answer he most longs to hear.

Is your mama a llama?

Praise for Is Your Mama a Llama?

Praise for Is Your Mama a Llama?

Deborah Guarino, is the author of the childrens classic, Is Your Mama a Llama? Selling more than a million copies, her playful books popularity spans two generations and is currently available in five different editions, including an animated DVD narrated by actress Amy Madigan and a lively musical version by composer Andy Mayo. It was also included in Oprahs Book Club for Kids, quoted in an episode of the prime-time series Medium, and endorsed by actress Jennifer Garner in People magazine, who recently became a literacy advocate on behalf of the Save the Children organization. The title of her book was even used, in 2010, as the answer to a $2000 question on the iconic game show, Jeopardy! Most recently Deborah was honored by Denvers Preschool Program in Colorado, which chose her book as its 2011 choice for the "One Book, One Denver" event, during which 1500 copies of Is Your Mama a Llama? were donated by corporate sponsors McDonalds and Kaplan Early Learning Centers to preschool and Head Start programs throughout Denver. During this event Deborah did tandem readings of her book with Denvers Mayor and Colorados state representative, who read the Spanish translation of the title while Deborah read the original version. During her public appearances at Denvers famous Convention Hall and at its largest public library, Deborah was delighted to be accompanied by two live local llamas, both of whom seemed to enjoy all the activities as much as she did! Born and raised in New Jersey, Deborah later lived in New York and London, where two of her original works were produced and broadcast by the BBCs Radio 4. In addition to writing for children, shes an artist and actor who also works as a freelance advertising copywriter, editor, playwright, actor, director, and professional speaker who frequently visits schools, libraries and literacy events across the U.S., giving fun, interactive presentations on writing and the creative process for children and adults alike. These presentations include a reading of her book and the story behind its creation, a question and answer period, fun activities like a narrated, improvisational skit, interactive nonsense songs, and lively performances of works in progress. Deborahs also the proud single mother of two whose oldest son, Josh, currently performs stand-up comedy in New York while Dan, a high school senior, hopes to pursue a career in art and special effects. Deborah Guarino can be reached via her website at www.deborahguarino.com.
Steven Kellogg has illustrated more than a hundred books, including IS YOUR MAMA A LLAMA? and THE DAY JIMMY'S BOA ATE THE WASH. He has also retold and illustrated the adventures of tall-tale heroes such as Paul Bunyan, Mike Fink, and Johnny Appleseed. He lives in Essex, New York.
If the item details above aren’t accurate or complete, we want to know about it. Report incorrect product info.