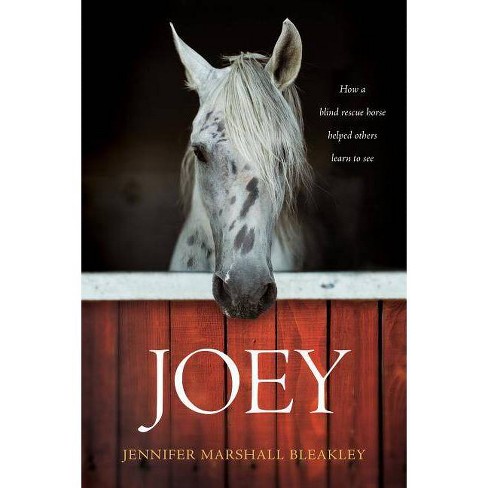 Joey needed a second chance.
The ranch needed a miracle.

With her fledgling horse ranch, Hope Reins, in dire financial trouble, the last thing Kim Tschirret needed was one more problem. But when she met Joey, a former prizewinning jumper who had been abandoned, neglected, and malnourished to the point of blindness, she saw in him the same God-given potential she saw in every abused and abandoned child her ministry was created to serve.

So, despite the challenges that would come with caring for a blind and wounded horse, Kim took a leap of faith and brought Joey home to Hope Reins.

But as Joey struggled to adapt to his new surroundings, trainers, and pasture-mate, the staff's confidence began to falter. Could Joey learn to trust again--to connect with the children who needed him so badly? What if they couldn't take care of Joey? And how much longer could they afford to try?

A heartwarming story of loyalty, friendship, and healing, Joey is a profound testament to the power of blind faith.

"Yes, I'm calling from the Nash farm off US 60. There are several badly emaciated horses out in the field, and some of them appear to be dead."

"Okay, ma'am, someone from the sheriff's department and animal control will be there shortly."

Penny tucked her phone into her pocket and headed toward the stables. "Please, God, don't let there be any more like these in there."

All of the stalls were empty. Then, just as she was about to leave, she saw a hoof sticking out from behind the end stall.

She dropped to her knees, mud and manure seeping into her jeans. Her heart caught in her throat. She recognized the familiar short blond tail, the white-and-black polka-dotted coat hidden beneath the crusted-on mud and filth.

The silence was broken by the sound of the front gate slamming shut. The authorities had arrived.

As she stood shivering in the rain while answering the sheriff's questions, a shout pierced the melancholy air. "Hey! This one is still alive!"

Penny dashed back to the stalls, where an animal control officer held his hand against the fallen horse's spotted nose.

"Are you sure?" she asked eagerly.

"Yes. I can feel air coming from his nostrils."

"Ma'am?" The sheriff looked at Penny. "Do you know this horse?"

For the second time, Penny dropped to her knees beside the animal.

"I do," she said, gently touching the horse's face. "His name is Joey."
If the item details above aren’t accurate or complete, we want to know about it. Report incorrect product info.