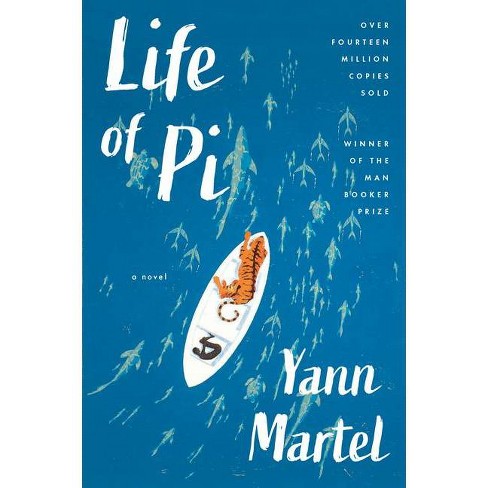 This brilliant novel combines the delight of Kipling's "Just So Stories" with the metaphysical adventure of "Jonah and the Whale, " as Pi, the son of a zookeeper, is marooned aboard a lifeboat with four wild animals. His knowledge and cunning allow him to coexist for 227 days with Richard Parker, a 450-pound Bengal tiger.

The son of a zookeeper, Pi Patel has an encyclopedic knowledge of animal behavior and a fervent love of stories. When Pi is sixteen, his family emigrates from India to North America aboard a Japanese cargo ship, along with their zoo animals bound for new homes. The ship sinks. Pi finds himself alone in a lifeboat, his only companions a hyena, an orangutan, a wounded zebra, and Richard Parker, a 450-pound Bengal tiger. Soon the tiger has dispatched all but Pi, whose fear, knowledge, and cunning allow him to coexist with Richard Parker for 227 days while lost at sea. When they finally reach the coast of Mexico, Richard Parker flees to the jungle, never to be seen again. The Japanese authorities who interrogate Pi refuse to believe his story and press him to tell them the truth. After hours of coercion, Pi tells a second story, a story much less fantastical, much more conventional--but is it more true?

"A story to make you believe in the soul-sustaining power of fiction." Los Angeles Times Book Review

After the sinking of a cargo ship, a solitary lifeboat remains bobbing on the wild blue Pacific. The only survivors from the wreck are a sixteen-year-old boy named Pi, a hyena, a wounded zebra, an orangutan and a 450-pound royal bengal tiger. The scene is set for one of the most extraordinary and beloved works of fiction in recent years.

Universally acclaimed upon publication, Life of Pi is a modern classic.

Yann Martel was born in Spain in 1963 of Canadian parents. Life of Pi was translated into forty-five languages, won the 2002 Man Booker Prize, and spent fifty-seven weeks on the New York Times bestseller list. He is also the author of the novels Beatrice and Virgil and Self, the collection of stories The Facts Behind the Helsinki Roccamatios, and a collection of letters to the prime minister of Canada, What Is Stephen Harper Reading?. He lives in Saskatchewan, Canada.

Look for the Reader s Guide at www.marinerreadersguides.com"

PRAISE FOR LIFE OF PI Life of Pi could renew your faith in the ability of novelists to invest even the most outrageous scenario with plausible life.-- The New York Times Book Review A story to make you believe in the soul-sustaining power of fiction.-- Los Angeles Times Book Review

A gripping adventure story . . . Laced with wit, spiced with terror, it's a book by an extraordinary talent.-- St. Paul Pioneer-Press A terrific book . . . Fresh, original, smart, devious, and crammed with absorbing lore.-- Margaret Atwood An impassioned defense of zoos, a death-defying trans-Pacific sea adventure a la Kon-Tiki, and a hilarious shaggy-dog story . . .: This audacious novel manages to be all of these. -- The New Yorker Readers familiar with Margaret Atwood, Mavis Gallant, Alice Munro, Michael Ondaatje and Carol Shields should learn to make room on the map of contemporary Canadian fiction for the formidable Yann Martel. -- Chicago Tribune

Yann Martel was born in Spain in 1963 of Canadian parents. "Life of Pi" won the 2002 Man Booker Prize and has been translated into more than forty languages. A #1 "New York Times" bestseller, it spent eighty-seven weeks on the list and was adapted to the screen by Ang Lee. He is also the author of the novels "Beatrice and Virgil" and "Self," the collection of stories "The Facts Behind the Helsinki Roccamatios," and a collection of letters to the prime minister of Canada, "101 Letters to a Prime Minister." He lives in Saskatchewan, Canada.
If the item details above aren’t accurate or complete, we want to know about it. Report incorrect product info.