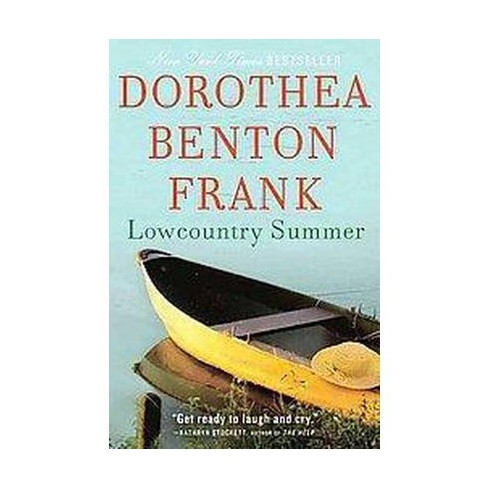 $12.74
undefined out of 5 stars with 0 reviews
be the first!be the first! ratings
Help us improve this page

Wonderfully atmospheric, infused with humor and poignancy, rich with the lyrical cadence of the South, and filled with lively characters, this long-awaited sequel to "Plantation" is vintage Frank, a deeply compelling and touching novel her fans are sure to savor.

"Frank...writes with genuine adoration for and authority on the South Carolina Lowcountry from which she sprang....[Her] stuff is never escapist fluff--it's the real deal."
--Atlanta Journal-Constitution

Return to Tall Pines in the long-awaited sequel to Dorothea Benton Frank's beloved bestseller Plantation. Lowcountry Summer is the story of the changing anatomy of a family after the loss of its matriarch, sparkling with the inimitable Dot Frank's warmth and humor. The much-beloved New York Times bestselling author follows the recent success of Return to Sullivans Island, Bulls Island, and Land of Mango Sunsets with a tale rich in atmosphere and unforgettable scenes of Southern life, once again placing her at the dais, alongside Anne Rivers Siddons, Sue Monk Kidd, Rebecca Wells, Pat Conroy, and other masters of contemporary Southern fiction.

Happy birthday? My pig-farmer boyfriend was in absentia, the county sheriff was the current cause of some very naughty thoughts, my drunk sister-in-law was passed out at my kitchen table, and my dead mother had sent balloons. What else could a girl want?

On the occasion of her 46th birthday, Caroline Wimbley Levine is concerned about filling the large shoes of her late, force-of-nature mother, Miss Lavinia, the former Queen of Tall Pines Plantation. Still, Caroline loves a challenge--and she simply will not be fazed by the myriad family catastrophes surrounding her. She'll deal with brother Trip's tricky romantic entanglements, son Eric and his mysterious girlfriend, and go toe-to-toe with alcoholic Frances Mae and her four hellcats without batting an eye, becoming more like Miss Lavinia every day . . . which is not an entirely good thing.

Return with New York Times bestselling author Dorothea Benton Frank to the South Carolina Lowcountry--as a new generation stumbles, survives, and reveals their secrets by the banks of the mighty Edisto River.

Here's one for the Southern gals as well as Yankees who appreciate Frank's signature mix of sass, sex, and gargantuan personalities.... below the always funny theatrics, however, is a compelling saga of loss and acceptance. When Frank nails it, she really nails it, and she does so here.--Publishers Weekly (starred review) "Lowcountry Summer has it all: a sassy, lovable narrator; great, believable characters; laugh-out-loud lines; page-turning action; and surprising plot twists. in other words, it's Dorothea Benton Frank at her best!"--Cassandra King, author of Queen of Broken Hearts "Seriously hilarious. LOWCOUNTRY SUMMER is also an incredibly poignant story of the relationship between a brother and sister. As only she can, Dorothea Benton Frank shows how we can survive loss, and explores the strong emotions home and family inspire. Get ready to laugh and cry."--Kathryn Stockett, author of THE HELP
If the item details above aren’t accurate or complete, we want to know about it. Report incorrect product info.