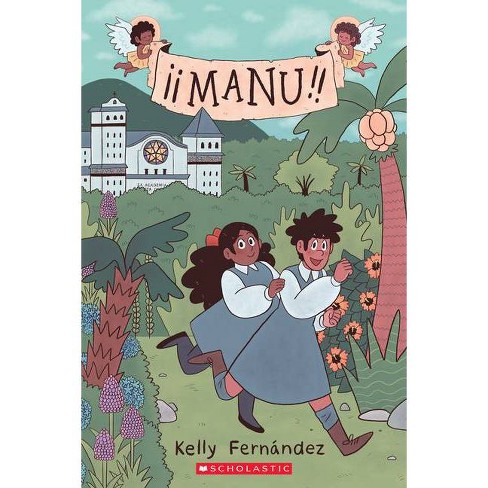 "The headmistress at school believes Manu has the potential to help people with her magic, but Manu would rather have fun than fit in. The other students claim she's secretly a demon and that she was raised by wolves. Manu doesn't care what people say about her, until an argument with her best friend Josefina ends with Manu getting cursed so she can't control her magic. Manu is determined to break the curse and prove she's the best witchling at school. But great power comes at a cost, and it may be a price Manu isn't able to pay."--Provided by publisher.

A funny and heartwarming middle-grade graphic novel adventure about friendship, defying expectations, and finding your place.Manu and her best friend, Josefina, live at a magical school for girls, and Manu is always getting into trouble. The headmistress believes that Manu has the potential to help people with her magic, but Manu would rather have fun than fall in line. One day, a prank goes seriously wrong, and Josefina gets angry and wishes for Manu's magic to disappear... and it does. Manu uses a dangerous spell to restore it, but it makes her magic too powerful and nearly impossible to control. Great power comes at a cost, and it may be a price that Manu isn't able to pay!

Amazon Best Book of the Month

Get Published by Graphix Contest Winner

★ "Fernández's cartoon artwork in saturated tones and with lush, vibrant backgrounds dense with plants makes for charming, light-hearted atmosphere, within which she affectionately depicts the rich variety of love people can have for one another, such as the love of a parent, foster parent, or best friend." -- Booklist, starred review

★ Though the emphasis on magic will draw in fantasy fans, this poignant graphic novel will resonate with any reader seeking a tale of friendship conquering all. -- School Library Journal, starred review

Fernández, an incredibly adept cartoonist, fills her pages with hilarious gags, rebellious children and a main character who has to come to terms with her true self before she can truly excel. -- The Washington Post

Adorable... If you've got a kid who loves comics, Manu is a solid choice with some really lovely art. -- NPR

A funny, friendship-filled adventure. Manu, Josefina, and their classmates will be a treat for all kids but especially for Latinx kids who may have dreamed about a magic school whose classmates looked like them. -- Brein Lopez, bookseller at Children's Book World in Los Angeles, CA

Kelly Fernández makes comics that are inspired by her daily experiences, Dominican heritage, and American culture. Her work has been featured in comics anthologies, and she won a Chicago Alternative Comics Expo Cupcake Award for her minicomic Cuidando. Kelly is a winner of the Get Published by Graphix contest, and Manu is her debut graphic novel. She lives in Queens, New York, and you can visit her online at kellyfernandez.net.
If the item details above aren’t accurate or complete, we want to know about it. Report incorrect product info.