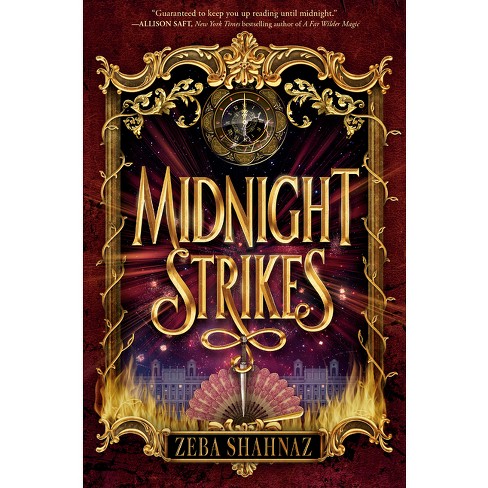 With whip-smart worldbuilding, spectacular twists, and the angsty romance of my dreams, Shahnaz's debut is guaranteed to keep you up reading until midnight."--Allison Saft, New York Times bestselling author of A Far Wilder Magic In this explosive fantasy debut with a time-loop twist, a provincial girl must work with a roguish prince to stop an attack on the royal family and escape a nightmarish curse that forces them to relive the same night over and over again. Seventeen-year-old Anaïs just wants tonight to end. As an outsider at the kingdom's glittering anniversary ball, she has no desire to rub shoulders with the nation's most eligible (and pompous) bachelors--especially not the notoriously roguish Prince Leo. But at the stroke of midnight, an explosion rips through the palace, killing everyone in its path. Including her. The last thing Anaïs sees is fire, smoke, chaos . . . and then she wakes up in her bedroom, hours before the ball. No one else remembers the deadly attack or believes her warnings of disaster. Not even when it happens again. And again. And again. If she's going to escape this nightmarish time loop, Anaïs must take control of her own fate and stop the attack before it happens. But the court's gilded surface belies a rotten core, full of restless nobles grabbing at power, discontented commoners itching for revolution, and even royals who secretly dream of taking the throne. It's up to Anaïs to untangle these knots of deadly deceptions . . . if she can survive past midnight.

"Midnight Strikes is pure, high-octane fun. With whip-smart worldbuilding, spectacular twists, and the angsty romance of my dreams, Shahnaz's debut is guaranteed to keep you up reading until midnight. A masterclass in YA fantasy."--Allison Saft, New York Times bestselling author of Down Comes the Night and A Far Wilder Magic A twisty, glittering and breathtaking fantasy romance that will ensnare you and refuse to let you go.--Tasha Suri, author of The Jasmine Throne

Zeba Shahnaz writes fantasy full of political intrigue, twisted romance, and a healthy dose of existential angst. A proud Pakistani American, she translated her love of storytelling into a graduate degree analyzing national identity, culture, and cinema in South Asia. She grew up in New Jersey, which she has yet to fully escape (though not because of a time loop). Midnight Strikes is her debut novel.
If the item details above aren’t accurate or complete, we want to know about it. Report incorrect product info.