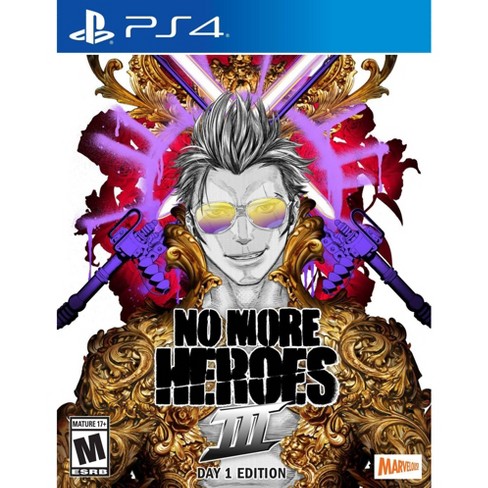 That’s right, nerds—No More Heroes 3 is back and better than ever on a host of new platforms! Everyone’s favorite otaku assassin, Travis Touchdown, has been forced out of retirement to defend not only Santa Destroy, but Earth itself. This time, "number-one assassin" won't cut it; Travis will have to take on the superhero from beyond the stars in an intergalactic test of might. It's his toughest challenge yet, but with a full repertoire of new abilities, tools, and jobs at his disposal, he'll prove he's more than a middle-aged has-been who talks to his cat. Dust off that beam katana, snap on those shades, and kill or be killed!

Grow Your Galactic Legend:
In classic No More Heroes style, the Galactic Superhero Rankings are packed with outrageous boss battles, each oozing with personality. Soar through the ranks and prove you're the baddest in the universe.

Old Dog, New Tricks:
Travis may be one bad day away from a mid-life crisis, but he’s still an innovator when it comes to kicking ass. From beam katana boss to wrestling pro, Travis can do it all. Take violence to new extremes with the customizable Death Glove, and punish those deadly invaders with combat that suits your style.

Superheroic Side Hustles:
Battling aliens ain't cheap. Explore Santa Destroy on Travis’ Demzamtiger to pick up odd jobs, from Coast Guard missions to toilet cleaning, then hit the road to unique locales outside of Santa Destroy like Neo Brazil and Thunderdome to keep the cash rolling in.

Bolder, Badder, and Better Than Ever:
Thanks to sharper visuals, No More Heroes 3 has never looked better. Add in improved load times and better responsiveness, and you’ll be dishing out eye-popping ultra-violence in no time.
PS4 Compatible
Compatible with PS4: This item is compatible with your PS4
If the item details above aren’t accurate or complete, we want to know about it. Report incorrect product info.