...Not Just an Ordinary Pony - by M E Colman (Paperback) 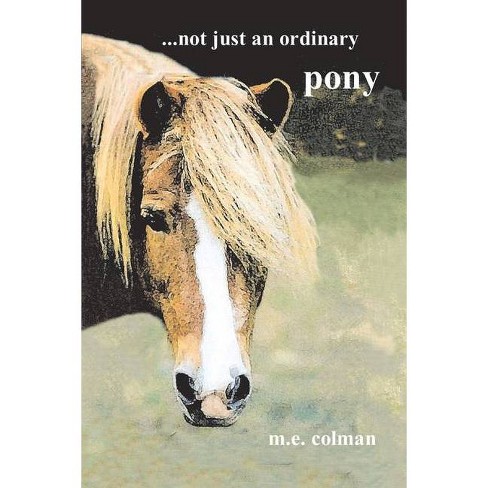 This is a true story of a small horse, a pony. He was not just an ordinary pony, but a beautiful, magical, mystical creature who appeared on our grounds many years ago... We realized early on that we really had no power or control over our boy, and he certainly lived up to that. As the years went by, he never disappointed us to be sure. You will see as the story unravels how incorrigible he truly was, right up to his last breath. This little guy was much more than what he appeared to be. He was the embodiment of the essence of a small horse, with a free spirit that transcended the ordinary... When the pony came to us, never could we possibly know what the future would bring and how this little guy would change all our lives. Was it just by chance that he showed up on our property, seemingly appearing out of nowhere? Or was something else at work, a power or energy greater than us. Call it what you will - the Creator, Universal Life force, the Great Spirit, God... It's almost as if this little horse - this mystical, magical being - was placed here, remaining in our lives for a time. And then was just taken from us, only to be returned to whence he came. On a soft summer's evening, if you are standing by the pony's fence, you can almost feel his presence. He is still with us. m.e. colman

A runaway pony that has escaped its owners, police, a professional rodeo roper and a veterinarian who shot it five times with tranquilizers has found sanctuary with the only humans it trusts - a convent of nuns. For two weeks, just about everything was done to round up the hyper little horse. Police chased him with poles that have loops on the end; the county's mounted park police were called in with the hope that their horses would calm him. Daily Record What was his story? Had he been abused? If only he could talk... so many questions. Where did he come from? The book is filled with sketches, numerous color illustrations in a drybrush watercolor style, delightful anecdotal stories, countless black and white photographs, and a few newspaper articles. And for the cat and dog lovers, we thought you might like to meet our other four-legged friends who lived with us during all those years the pony was here. Brief profiles of that cast of characters will also be included. Throughout the time our boy was with us, his column Pony's Point of View appeared in our newsletter. Reprints of these short entertaining and thought-provoking articles will be a highlight in the second half of the book.
m.e. colman

M.E. Colman is a life-professed member of the Convent of St John Baptist, an Episcopal religious community for women in Mendham, NJ. Before entering the convent in 1991, Margo had a varied background in music, art, and psychology, receiving both undergraduate and graduate degrees from Fairleigh Dickinson University. After earning a BA in Fine Arts and Psychology, Margo continued her education in Human Development, receiving a Masters degree in 1981. Training in Ignatian Spirituality and her graduate level work in Human Development both provided the foundation for Sr. Margo to do spiritual direction since 1996. Her background in the arts and psychology often come into play when guiding others. Since 1999, Sr. Margo has been leading groups to Ireland, Scotland, Wales and Cornwall. Upon returning from one of her Ireland trips, she felt moved to write a book about the people in Ireland. Sometimes a Star is essentially conversations with 20 individuals in Ireland, asking them questions such as, what sustains you and where do you find God? Sr. Margo is passionate about wildlife preservation and the environment. Her love of nature and animals clearly is evident in her writing.
If the item details above aren’t accurate or complete, we want to know about it. Report incorrect product info.