Nothing Can Possibly Go Wrong - by Prudence Shen 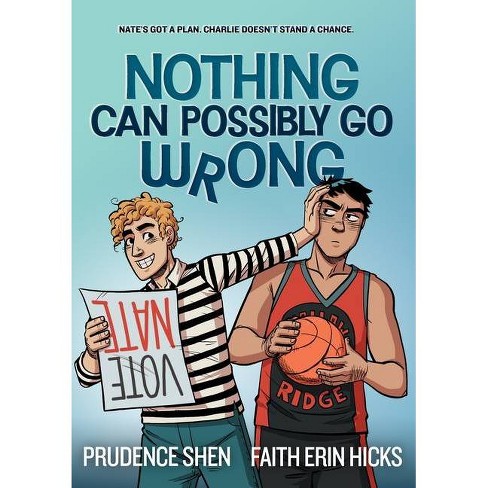 Captain of the basketball team Charlie and president of the robotics club Nate battle it out in a school class election campaign for funding to cover a robotics competition or new cheerleading uniforms.

You wouldn't expect Nate and Charlie to be friends.

Charlie's the laid-back captain of the basketball team. Nate is the neurotic, scheming president of the robotics club. But they are friends, however unlikely--until Nate declares war on the cheerleaders and the cheerleaders retaliate by making Charlie their figurehead in the ugliest class election campaign the school has ever seen. At stake? Student group funding that will either cover a robotics competition or new cheerleading uniforms, but not both. Bad sportsmanship? Sure. Chainsaws? Why not. Running away from home on Thanksgiving to illicitly enter a televised robot deathmatch? Let's do this!

Prudence Shen is a writer and caffeine addict who pays rent in Virginia even though she mostly lives in airports. Nothing Can Possibly Go Wrong is her first book. She loves robots. Not like that.

Faith Erin Hicks is a writer and artist who lives in Vancouver, Canada. Her published works include Friends with Boys, The Adventures of Superhero Girl, The Last of Us: American Dreams (with Neil Druckmann), The Nameless City trilogy, Comics Will Break Your Heart, and the New York Times bestselling Pumpkinheads (with Rainbow Rowell).

I Am Not Starfire - by Mariko Tamaki (Paperback)

This One Summer - by Mariko Tamaki

Nothing Can Possibly Go Wrong - by Prudence Shen (Hardcover)

There's Nothing Wrong With Her - by Mary Beth Yakoubian (Paperback)